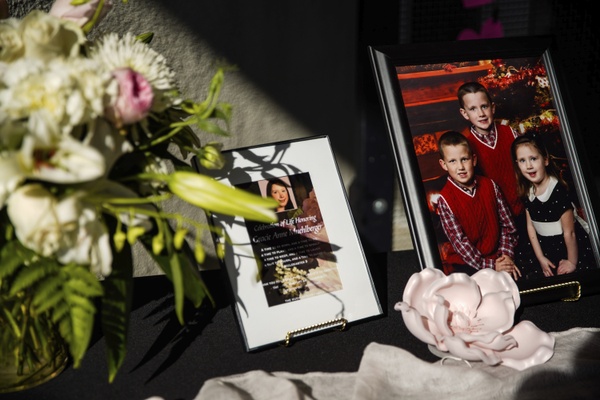 Gracie Anne Muehlberger, a 15-year-old girl, was shot and killed Thursday, Nov. 14, at Saugus High School in the 21900 block of Centurion Way in Santa Clarita, according to Los Angeles County Medical Examiner-Coroner’s records.

The shooter pulled a gun out of his backpack and opened fire on Gracie and four others, then shot himself.  The entire incident took 16 seconds.

Authorities said the motive in the shooting was unclear.

Gracie was described by classmates as sweet and fun, someone who made a momentous impact in her short life.

Alexa Olsen, a freshman at Saugus High School who was in a dance class with Gracie, said she remembered her as a goofy, fun girl who cheered her on.

When the girls made eye contact in the middle of practice as they danced to jazz, Gracie would make funny faces and the two would burst out laughing, Alexa said.

When they made a mistake, the two would laugh together and keep on dancing.

“She was so nice and kind to everyone,” said Alexa, 14. “You would just smile looking at her.”

Though the girls no longer had dance class together, Gracie would still wave and smile when they passed each other in the hallway, Alexa said.

“She knew everyone and everyone knew her. It’s sad she passed away at such a young age and didn’t get to experience what other people experience,” Alexa said.

In the hours after the attack, friends and family expressed their anguish on social media.

“My heart is killing me right now,” a person who identified himself as Gracie’s brother posted on Twitter. “You are the best sister I could’ve asked for. I just know you’re my guardian angel now. I love you Gracie.”

On Nov. 23, Gracie’s family held a celebration of her life at  Real Life Church in Valencia that drew hundreds of friends and relatives.

Gracie was part of a high school ministry at Real Life, a nondenominational Christian church.

Pastor Rusty George led the audience in a prayer, thanking God for Gracie's joy and her effect on the people she knew. He said that Gracie is in a better place.

Mourners listened to "Cinderella" and "Amazing Grace" and watched videos of Gracie dancing and singing. They shared their memories of her, describing her as funny, free-spirited, vivacious, independent and "unapologetically herself."

She loved Starbucks and laughing and rap music and Vans shoes.

Addison Koegle, 14, who was wounded in the shooting, told the audience that she's never been in more pain, physically or emotionally. She remembered the brownies she and Gracie would bake together and the performances they'd put on for their parents.

"We talked about growing old together and living in a house with a bunch of dogs," she said.

Her father, Bryan Muehlberger, recalled how Gracie could eat an entire jar of cherries from Trader Joe's in one sitting and how she was the worst deejay, always changing the song every 30 seconds.

He remembered their "date" nights, when they'd both get dressed up and he'd open the door for her and let her order first, little ways to show her "how a man should treat her."

He shared an excerpt from her journal and asked that everyone in the audience remember her words: "You only have one life to live, so why not live it great, real and fill it with memories and experiences."

"We are forever Gracie strong," he said.

Photo: A photograph of Gracie Anne Muehlberger and her siblings outside the Real Life Church, where a celebration of life was held for her Nov. 23. Credit: Kent Nishimura, Los Angeles Times

Share a memory or thought about Gracie Anne Muehlberger