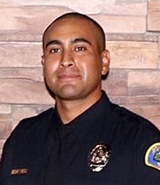 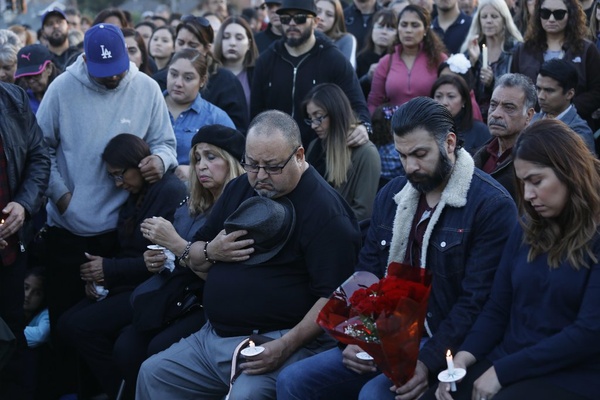 Greggory Casillas, a 30-year-old Latino police officer, died Friday, March 9, after he was shot in the 1400 block of South Palomares Street in Pomona, according to Los Angeles County coroner’s records.

Casillas was a new Pomona Police officer, working the last shift of his six-month field-training period, when he got into a pursuit with a reckless driver who refused to pull over, The Times reported.

The pursuit ended around 9 p.m., and the driver fled into a nearby apartment complex and barricaded himself inside, according to a Los Angeles County Sheriff’s Department news release.

When Casillas and another officer chased after him, the suspect shot through the door, according to the news release. Casillas was struck first, around 9:10 p.m., and the second officer was struck in the face when he tried to pull Casillas to safety.

About 75 officers from several agencies converged on the apartment but initially were unable to pull the wounded officers to safety because of the gunfire, The Times reported.

When officers were able to reach their two comrades, they were taken to the hospital, where Casillas was pronounced dead at 10:31 p.m., according to coroner’s records.

The other officer, identified as Alex Nguyen, has been released from the hospital “and is doing well,” according to a Twitter message from the department on March 12. 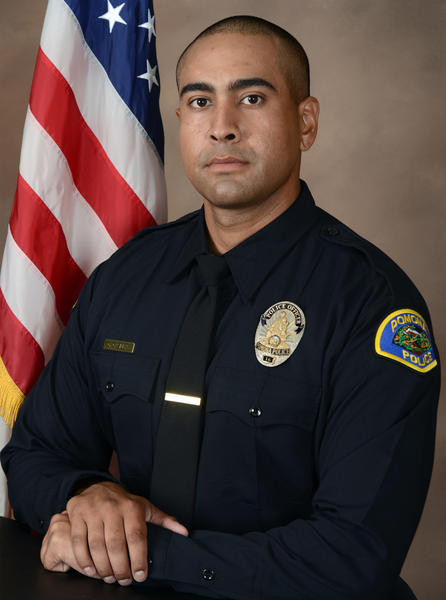 Residents of the apartment building were evacuated, including members of the suspected shooter’s family. The standoff between the suspect, Isaias De Jesus Valencia, 38, and officers lasted about 15 hours until deputies with the sheriff’s Special Enforcement Bureau eventually entered the building and used a police dog to get Valencia to surrender, according to The Times.

After he was apprehended, Valencia was escorted to a patrol car in handcuffs and clad only in his underwear.

Valencia was arrested on suspicion of murder the day after the shooting. He was formally charged on March 13, with the special circumstance allegations of murder of a peace officer and murder for the purpose of avoiding or preventing a lawful arrest, according to a news release from the Los Angeles County district attorney’s office.

He also was charged with seven counts of attempted murder and one count each of fleeing a pursuing officer’s vehicle and possession of a firearm by a felon. Valencia’s arraignment was rescheduled for May 1, according to court records.

Casillas’ funeral will be at 9:30 a.m. Thursday, March 22, at Purpose Church, 601 N. Garey Ave. in Pomona, followed by a procession to Forest Lawn-Covina Hills Cemetery at 21300 Via Verde Drive in Covina.

Casillas’ body was escorted by a police procession from Pomona Valley Hospital Medical Center to the coroner’s office in downtown Los Angeles. The procession came just hours after he would have completed the “ghost phase” of his training, a two-week stretch when his training officer wore civilian clothes, mostly observing to make sure Casillas was ready to work on his own.

“He really wanted it,” Allison Campos, a jailer with the Pomona Police Department, told The Times. “I’ve never met someone so eager to become a police officer.”

More than 300 mourners gathered outside Pomona police headquarters on Sunday night, March 11, for a candlelight vigil. Officers wore black mourning bands with the number “16” — Casillas’ badge number — over their badges.

“Losing Gregg has ripped a hole in the hearts of his family and members of this department,” Pomona Police Chief Michael Olivieri said at the vigil.

Colleagues remembered the 6-foot-4 Casillas as a gentle giant, a hard worker who loved to joke and motivate his co-workers. A father of two small children, he was just starting to build a family with his wife, Claudia Guzman, they said.

The road to becoming an officer wasn’t easy, but it was Casillas’ long-term goal — and he earned it, his colleagues said. He joined the Pomona department in 2014, getting his foot in the door as a records specialist and poring over officer reports to learn how they should be written.

Later, he became a jailer, where he worked with Myra Williams, a seasoned jailer who has been with the agency more than 15 years. Rowdy inmates would settle down in his presence, she said.

“When he was training, he would want to do everything by himself,” she said, recalling his saying, “ ‘Hey, Williams, how do you do this? Show me, but don’t show me.’ ”

Campos, who also worked with Casillas in the jail, said he always carried study materials: flashcards of penal codes, books to prepare for the police officer exam. He ate healthy, bringing home-cooked chicken and rice without spices to work, and stayed in shape so he’d be ready when he was accepted into the Police Academy.

“He was willing to do whatever he had to,” Campos said.

Eventually, he got the email: a conditional offer to be a Pomona police recruit. He graduated from the San Bernardino County Sheriff’s Academy and was sworn into the Pomona Police Department in September.

“He earned his spot,” said Lt. Marcus Perez, whose godson completed the academy with Casillas.

As a supervisor who joined the agency 25 years ago, Perez periodically checked in with field training officers to see how trainees were doing.

When it came to Casillas, the answer was always the same: “That guy learns quick,” Perez recalled trainers saying. “ ‘You only need to tell him one time, and that’s it’ — that’s the kind of character he had.”

Campos, who also dreams of becoming a police officer, is now more motivated than ever.

“He didn’t get to do the job he wanted to,” she said, through tears. “But I hope that I can make him proud.”

The shooting is still under investigation, and the district attorney’s office has yet to decide whether to seek the death penalty against Valencia.

Do you have information to share about the life of Greggory Jonathan Casillas ? The Homicide Report needs your help. Please fill out this form or e-mail us at homicidereport@latimes.com.

Share a memory or thought about Greggory Jonathan Casillas

May he RIP.. Prayers to the family 🙏