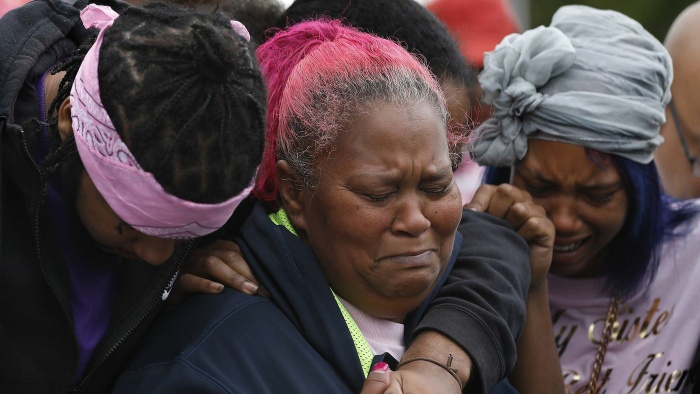 Shortly before 9 p.m., Hannah and her mother, Samantha Mays, were standing outside a restaurant called the Best Burger when a person shot Hannah, said LAPD Det. Everardo Amaral.

Amaral said that the teenager was shot multiple times in the lower torso.  Hannah was taken to a hospital where she was pronounced dead at 10 p.m., according to coroner’s records.

The motive behind the shooting remains unclear, police said.

That night, Hannah told her mother that she wanted to grab a bite to eat. The two were staying with relatives a few blocks from the burger stand, so Hannah and her mother walked there.

"My mom told me she pulled Hannah down to protect her," said Markeis Jones, the girl's brother. "When the shooting stopped, my mom got up and told Hannah to get up, but she didn't."

Relatives describe Hannah as a loving and joyful teen who had her eyes set on going to college and becoming a nurse.

Her energy was contagious, said Jones, 27. He said that even when Hannah was angry with him, she would maintain a sense of humor.

"She would always love to stand on my back, and whenever she got angry she would tell me, 'No, I'm not going to stand on your back,' " Jones said.

Hannah also loved going to church. Theresa Arnold, a family friend, said she had been taking her to Bible study since she was 5.

"She was a good and happy kid," Arnold said. "She always wanted to help out at the church."

But it was her close relationship with her mother that many relatives found special.

"They were like two peas and a pod," her brother said. "I remember I was at the grocery store and I saw Hannah pulling a shopping cart with my mom inside."

That didn't mean life could not be hard for the pair even before the shooting. Jones said his sister and mother were homeless for a while and lived on skid row.

"She had only recently found a place to stay and was in the process of completing the paperwork," Arnold said of Mays.

Nancy Wilson, the girl’s aunt, said Hannah's difficult life experiences made her want to help others by becoming a nurse.

The city is offering a $50,000 reward for information in the shooting.

Photo: Samantha Mays, center, grieves with her son Ronnie and daughter Mollie at a news conference near where her 15-year-old daughter, Hannah, was fatally shot last week.

Do you have information to share about the life of Hannah Ronyae' Bell ? The Homicide Report needs your help. Please fill out this form or e-mail us at homicidereport@latimes.com.

Share a memory or thought about Hannah Ronyae' Bell

Beyond sad, mad is a better word for what I'm feel right not. Enough of the senseless killing of innocent people, especially children. I hope whoever is responsible for this cruel act of violence, is make to pay! #enoughisenough!

God! Bless you Hanna and I sure hope the scum responsible is captured and prosecuted.
I pray for you and your family especially your mother. It's a funny thing that of all the tragedies
I have read in the Homicide reports yours really hits home. It's painful to see your picture and
I hate this has happened to you. I'm not sure what's going to happen to us in this Country and
I have no answer's. I just wish you all would stop it with this sick behavior. You have taken away
this sweet Angle for no reason at all and we are all so tired of it.

This really hurts my heart. No one seems to care about black women and children. Hannah, I’m so sorry you died so viciously, R.I.P. beautiful.