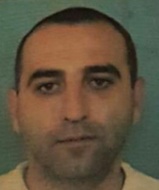 Hovik Krboyan, a 37-year-old Armenian man, died Wednesday, Sept. 14, after he was shot in the 4900 block of Medina Drive in Woodland Hills, according to Los Angeles County coroner’s records.

A Los Angeles police detective told KTLA-TV that Krboyan opened the door to his home shortly before midnight on Sept. 13 because he had ordered a pizza. Instead, he was met by assailants who opened fire.

Krboyan was shot multiple times, according to Ed Winter, spokesman for the Los Angeles County Department of Medical Examiner-Coroner.

Krboyan's wife and daughter, who were inside the home, were not harmed. Detectives interviewed neighbors who reported hearing gunshots, according to a news release from the LAPD.

“We aren’t sure yet what’s behind this man’s shooting, but cases like this often stem from business or domestic disputes,” LAPD Capt. Paul Vernon said in a statement.