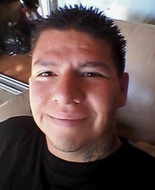 Isaiah Miguel Equihua, a 22-year-old Latino, died on Tuesday, April 14, 2015, after he was shot at the corner of California and Michigan avenues in South Gate, according to Los Angeles County coroner’s records.

Shortly before 11 p.m., the couple sat down on a bench at the southeast corner of the intersection to wait for a bus when a man walked up and began talking.

“Words were exchanged, the victim stood up and the suspect shot him several times before running away,” House said.

Equihua was taken to a nearby hospital where he was pronounced dead the following afternoon at 1:40 p.m., according to coroner’s records. The cause of death was listed as gunshot wounds to the head.

The Los Angeles County Board of Supervisors approved a $20,000 reward on Nov. 14 to anyone who can provide information leading to the arrest and conviction of the suspect, House said.

The suspect was described as a Latino who may have gotten into a compact gray sedan shortly after the shooting.

Investigators believe the shooter was probably a gang member. Equihua had been affiliated with a gang when he was younger, “but at the time he was murdered, he was not active with any gang,” House said. “He basically had left that behind.”

That intersection is heavily traveled, even late in the evening, House said, and many people were in the area at the time of the shooting, but no one has provided information that would identify the suspect.

Equihua lived in South Gate, House said. “He has a really nice family, and he was just waiting for a bus to take him home. It’s real senseless and real sad.”

Do you have information to share about the life of Isaiah Miguel Equihua ? The Homicide Report needs your help. Please fill out this form or e-mail us at homicidereport@latimes.com.

Share a memory or thought about Isaiah Miguel Equihua

Isaiah was one of my favorite cousins. He had such a kind heart and he didn’t deserve this. Will never forget the memories that I have of him and I know that I will, in Jesus name, I will see him again. I love you Isaiah and I miss you.

Isaiah was a very close family friend, he suffered a lot of heartache and always treated others as he wanted to be treated. Only to come down to his passing. he didnt deserve this. the family is going through alot of pain and misunderstanding. if only there was a way to bring our dear Isaiah back. this is such a tragedy. he was a very heartwarming person. he was always goofy , he made others smile and was always able to lift everyones spirits, without even trying. he did a very good job hiding his pain and his feelings. only few knew what his life was like and where things went wrong. but despite all that we tried our best to liven him up . Rest peacefully our dear angel. i hope the family is able to seek justice <3