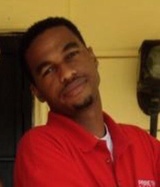 People in the neighborhood found him wounded and called authorities, Barling said.

Amayo was taken to a hospital, where he was pronounced dead at 5:16 a.m., according to coroner’s records.

Amayo was not a gang member and the motive for his stabbing remains unclear, according to detectives.

Do you have information to share about the life of Iyayi Orhue Amayo ? The Homicide Report needs your help. Please fill out this form or e-mail us at homicidereport@latimes.com.

Share a memory or thought about Iyayi Orhue Amayo

Happy birthday Yaya! Today we would’ve been celebrating your bday you’re dearly missed we will never forget you friend! I just want to buy you a Heineken and hug you and laugh the night away, have a cypher with you! You will always be in our heart our golden angel. See you when we get there. - Jay and Cell

I miss you so much I wish I could call you, see you again. I will never forget your smile. Still feels like a nightmare I can't wake up from, you didn't deserve what happened to you. Such an amazing person and loved by so many! Rest in paradise Iyayi.

Missing you everyday my dear friend I pray for justice and peace for your family and friends. May you lay down in gods arms eternally. Love you forever!

Hey There Bro... I know by now you have crossed over and are watching over all of us. Tomorrow Is Your Day. Your Memorial will be beautiful. I Love You. Your in my thought process everyday and everynight. Waiting for the day when your case will be solved. I'm sure detectives are working hard and It will be solved soon...... I miss you little Broski, and I heart you. Always and Forever. Xoxoxoxo

Words cant describe how heart broken i am and to so many people who was close to you. We were best friends back in the day during San Luis Obispo Times and the memories we built during that time are unimaginable.......It was nothing but love, nonstop laughs, and everyday there was a new story. :) Life took us in a separate direction since i moved overseas to Dubai and i'm so glad we caught up 4 months ago over the phone.

It's a shame how the good ones have to leave early but i know one thing, you are at a better place than here and i'm sure we will meet again someday. Rest in Love brother, and you will be in my heart for the rest of my life.

As the days go by, it doesn't get easier dealing with your passing. Knowing that our sunday fundays are gone now is tough. I know you're fine where you are, but we miss you down here. We will continue to honor you the best way we know how. Filled with the best rap cyphers, topped off with memories of your laugh and smile. Happy Sunday Bro Bro. Life has changed and will forever be different. We are so lost not knowing...... Love You Always ♡♡♡

Iyayi you were such an amazing person. You became my friend at 14 and we remained friends even in our 30's! You used to tell my mother you would marry me one day! It was adorable! You had such a kind heart and giving spirit! I pray for your mom, brother and daughter.. and I know I will see u again!!! I have no doubt about it!

EI....you light up a room no matter how shitty and serious the mood may have been u always brought a laugh along with ur amazing heart!! Who ever did this to u will stand before our maker and have to answer the question that ALL of us here left broken hearted are searching for and the only reprieve that is able to ease the pain in my soul is that, whoever did this WILL NEVER BE WORTHY ENOUGH TO BE WHERE U ARE IN HEAVEN LOOKING OVER US! Ur forever Sis,
Sam 😥

I was so very sad and sorry to hear of my good friend's passing. Iyayi was a great person and a cherished friend. I will cherish my great memories of our time together. I will never forget all the wonderful times we spent together. My heartfelt sympathy to his family. They say there is a reason and time will heal but neither time nor reason will change the way I feel. - I will miss you forever Yaya!

Iyayi Amayo Was Like Gold. He Was Genuine, Loving, And His Heart Was Bigger Than Life. He Will Forever Be Loved And Missed. Never Forgotten. I Love You Bro Bro!! Xoxoxoxo Rest In Paradise, And Tell Ant I Said "What's Up" ♡♡♡

Iyayi Amayo was beloved by his friends and family, and his smile lit up every room he entered.