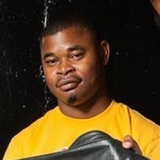 Jamar Lamonte Mccollum, a 26-year-old black man, was found dead Monday, April 15, after he was shot in the 600 block of East Century Boulevard in Green Meadows, according to Los Angeles County coroner's records.

About 7 a.m., Mccollum was found shot to death inside a gray Lexus in the area, said Los Angeles police Det. Nathan Kouri.

Mccollum’s body had been there for hours before it was discovered, police said. He was pronounced dead at the scene.

Police have few details about the death and have not identified a suspect.

Mccollum, a motorcycle mechanic, lived down the street from the crime scene and was not a gang member, police said. He had a 5-year-old son.

The next night, his mother, Jackie Mccollum, stood near the spot where her son was discovered, surrounded by other mothers who had lost a child to violence.

“We’re not supposed to bury our kids,” Mccollum said to the assembled TV camera crews. She thanked everyone and said there were no words to describe the feeling of losing a son.

“I’m going to keep on trudging,” she said. “And my son will always be in my heart.”

As night fell, about 100 people had come to mourn him. Some lighted white candles that formed a “J” and a heart on the street.

His girlfriend, Chevette Veney, said he liked to ride motorcycles and was part of a motorcycle club called the L.A. Defiant Ones.

“This was not his time,” she said, her voice strained from crying.

Do you have information to share about the life of Jamar Lamonte McCollum ? The Homicide Report needs your help. Please fill out this form or e-mail us at homicidereport@latimes.com.

Share a memory or thought about Jamar Lamonte McCollum

You will forever be missed and never forgotten . Your funny laugh and smile always brings light 🕯️ #GONE 2 SOON I send my condolences to your mother family and most of all your son

I'm the mother of his child and this is life changing for my son an I...I never knew how death can change people but my son has truly been affected by this he isn't the same an he never will be neither will I...