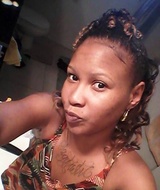 Jamie Renee Baker, a 32-year-old black woman, was shot and killed Tuesday, March 12 in the 100 block of West 109th Street in Broadway-Manchester, according to Los Angeles County Medical Examiner-Coroner’s records.

Officers responded to a call about 8 p.m. the night before from one of Baker’s relatives, who was concerned for her safety inside a residence, said LAPD Det. Meghan Aguilar, a spokeswoman for the department.

When police arrived, a car was blocking the driveway and officers struggled to make contact with the people in the home. A SWAT team arrived about 10 p.m. after officers determined that a man inside the home was armed and had barricaded himself, Aguilar said.

Police eventually used a robot to enter the home early the next morning and found Baker dead inside the home, she said.

Baker was pronounced dead at the scene at 3 a.m., according to coroner’s records.

A 49-year-old black man was found in the attic with what appeared to be a self-inflicted gunshot wound, police said. The coroner's office ruled the man's death a suicide.

Police said the two were in a relationship and got into a dispute before the shooting.

Do you have information to share about the life of Jamie Renee Baker ? The Homicide Report needs your help. Please fill out this form or e-mail us at homicidereport@latimes.com.

Share a memory or thought about Jamie Renee Baker