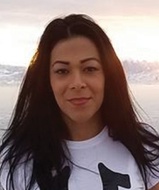 Victoria “Viccky” Ramos Gutierrez, a 33-year-old Latina, was found stabbed to death after a house fire Wednesday, Jan. 10, in the 1700 block of South New Hampshire Avenue in Pico-Union, according to Los Angeles County coroner’s records.

Authorities were called to a house fire about 3:15 a.m. and found Gutierrez’s body inside a unit in the building, police said.

Ramirez also is charged with two counts of arson, according to prosecutors.

Ramirez met Gutierrez online and came to her house, where he stabbed her to death after a dispute, police said.

"The motivations for this vicious murder are still under investigation," Los Angeles Police Lt. John Radtke said at a news conference, adding that Ramirez admitted stabbing Gutierrez in her home.

Authorities are considering whether the killing was a hate crime. Gutierrez was a transgender woman.

"We know that there are people out there who have probably encountered the suspect, who may be fearful and anxious. We ask them with open arms to please come forward," said LAPD Assistant Chief Beatrice Girmala, who also serves as the department's LGBTQ liaison.

Mariana Marroquin, the program manager for the anti-violence project at the Los Angeles LGBT Center, said Gutierrez was active in the transgender community.

In 2015, she worked on the center's Transgender Day of Remembrance, a yearly event that honors transgender victims of violence.

"It's ironic that she ended up being a victim also," Marroquin said.

Last year, at least 28 transgender people were killed, according to a report released by the Human Rights Campaign Foundation and the Trans People of Color Coalition. The two groups called 2017 the deadliest on record for transgender people.

Since January 2013, the foundation has documented at least 102 transgender people who were victims of fatal violence, according to its website, which said Gutierrez was the first transgender woman of color and the second transgender person to have died this year as a result of violence.

Maria Roman, 46, said she had known Gutierrez, who was from Honduras, for about five years.

"She was such a sweet person," she said. "She was always really happy."

Police are looking for people who knew Ramirez or other potential victims.

Do you have information to share about the life of Victoria "Viccky" Ramos Gutierrez ? The Homicide Report needs your help. Please fill out this form or e-mail us at homicidereport@latimes.com.

Share a memory or thought about Victoria "Viccky" Ramos Gutierrez