'He was my first and only love,' says mother of 8 whose husband was killed 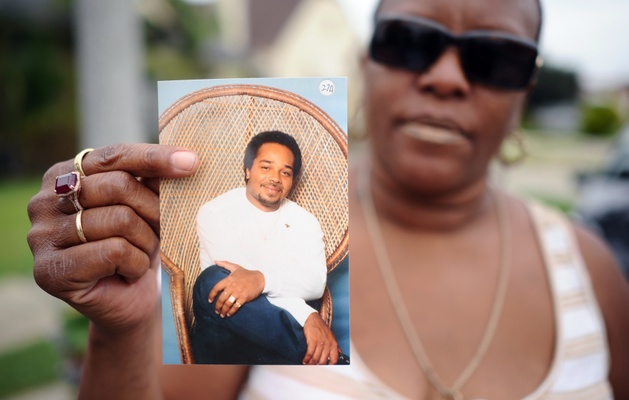 Jessa Weaver Betts parked her gray van a few feet from the street where her husband, 51-year-old Carl Sebastian Betts, was killed.

The mother of eight turned to her 11-year-old son in the passenger seat and gave him some instructions: Stay in the car; lock the doors; do not eat the cakes in the back.

Jessa Betts, 47, of Apple Valley has struggled over the past few weeks to raise money for her husband’s funeral by selling meals. Taco Tuesday. Chicken Wing Wednesday. Fish Dinner Friday. An assortment of cakes in the back seat was the latest inventory. Over 10 days she’s raised $790, but she’s still worried. That money will barely cover the church rental fee.

In the car on Wednesday in South L.A.'s Manchester Square neighborhood, she glanced in the rear-view mirror, affirming her cool demeanor, then stepped out.

The scene of Carl Betts’ death still lingered on the street. Bullet holes had pierced the neighboring houses and vehicles. A dried patch of blood marked the spot where first responders pulled Carl Betts from his car.

Jessa Betts broke down, tears rolling down her cheeks, her shoulders shuddering. Wearily, she moved toward where he lay on the ground, bleeding. She knelt and stroked the spot. “He was my first and only love," she said through her tears. 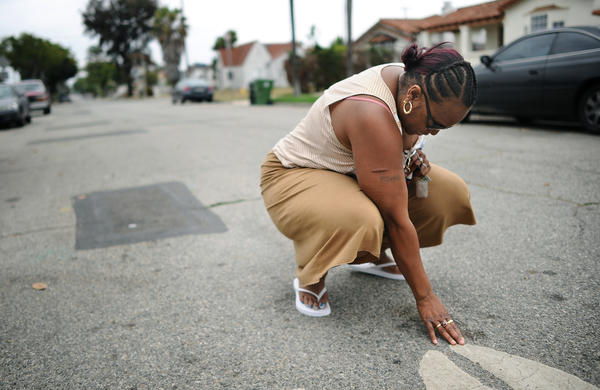 Before the killing, Jessa Betts was in Los Angeles with her family for a couple of days for a gathering to remember her late daughter, Johnessa, 29, who died of complications from leukemia last year.

On May 31, the night of the killing, Carl Betts, who had been in L.A. separately visiting his family in the area, was with a friend, and they went to visit others in the 1900 block of West 85th Street in Manchester Square.

When the men arrived in a rental car at the friend’s house, friends began to come outside. Within seconds, a dark-colored sedan pulled up along the driver’s side, and Carl Betts was asked a dangerous three-word question: “Where you from?”

The gunman opened fire into the car. Carl Betts was pronounced dead at the scene. The other man in the car was not injured.

Shatioishia Van, 47, was one of the friends walking out of the home when the gunman opened fire.

“The bullets, the car speeding away, the police showing up. It all happened so fast," Van said. "All I could do was react.”

At a memorial this week, people placed blue, yellow and white candles in front of the home where Carl Betts was shot and continued to leave other items to remember the man whom family and friends described as a jokester and a sports fan.

A bottle of Remy Martin cognac sat among the candles, although Jessa Betts said her husband did not drink. A pair of Clubmaster sunglasses rested atop a Dallas Cowboys football, his favorite team. Van, the neighbor, said she placed one of Carl Betts’ favorite doughnuts -- powdered, creme-filled -- at the scene. Someone had taken it later that day.

“A lot of this stuff is random, but most people don’t have much to bring. So I appreciate that they care enough to leave something," Jessa Betts said. 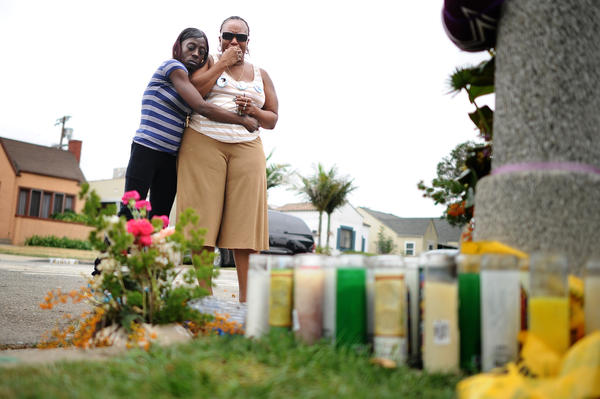 Jessa Betts, who wore three buttons bearing a picture of her husband’s face, stared down at the memorial. She said she will remember her husband as the sly young man who picked her up in an arcade on Normandie Avenue more than 30 years ago. She was playing a game of "Pac-Man" when Carl Betts approached her and commented on her jeans.

“What’s all that?” Carl Betts asked, referring to the writing on her pants.

“I think you’re cute too,” he flirted back.

The couple grew up in the neighborhood, sneaking off to be together. At 16, Jessa ran away from home to be with Carl Betts. The two got married seven years later at the Little White Chapel in Las Vegas.

Wiping away tears, Jessa Betts chuckled when she remembered a conversation they had two days before he died.

He was leaving the house in Apple Valley to get his disability check in Los Angeles. Jessa Betts did not want him to go because she knew how dangerous the area could be, and she began to hassle him.

He then told her he would deal with the hassling as long as he lived, Jessa Betts said. And she said she would keep it up, standing right beside him.

$750.00 for a church rental fee? Are you serious!?! If Jesus didn't charge to resurrect, what makes anyone think it is right to charge a person to use the church to bury a person? The collection plate is supposed to cover all of that, not enable the preacher to buy $2,000.00 socks!!! My condolences to Mrs. Betts and may YHVH help her to recover.

carl betts, gone but not forgotten always cool as a fan.i thank god for knowing him though i havnt been around the los angelas area in years,whenever i seen him he always took the time out to speak a good word.whenever he was at rowley park playing softball i would see him from time to time and he was always upbeat with a smile. God bless the betts family each and every one.Much love to strawdog rip

R.i.p. strawdog you are truly going to be missed!!!

I knew this young man from growing up in the same neighborhood my heart goes out to him I too lost my child to the same gun violence at the tender age of 18yrs old 3 days from his 19th birthday so the pain this lady is feeling I know so well I live it everyday, this is so sad I want to know that after these people have done the most heinous thing how do they feel when they are alone with their thoughts, that's 1 question I would like answered too Carl's family cherish the memories you have and let them carry you on. Think of him always watching over you and wanting to make him proud of the way you deal with his loss.. that for me helped to get thru some of my most darkest days. Peace and blessings to you and the family. Amen...

Yall sound like the cutest damn couple. The way you remember when yall first met. You running away so young to be with him. the ceremony in vegas. Reads just like a cute ass romantic movie.
23 years together…damn. now Thats a real marriage. one of the very few out there still going strong. and then some waste of oxygen ends it. I don't know what you goin through, pray to God I never will. but yall be in my prayers.. RIP Carl

I am born and raised in Los Angeles. I have witnesses at least two different killings that look like this. I can't think of one person I was raised with that hasn't. This is tragic, sobering and ultimately abnormal. Unfortunately, to us South central babies, this is normal. There are some things that are Americas little dark secret and the trauma we suffered from these senseless acts of violence is one of them. I'm sorry for you loss ma'am. Blessings.