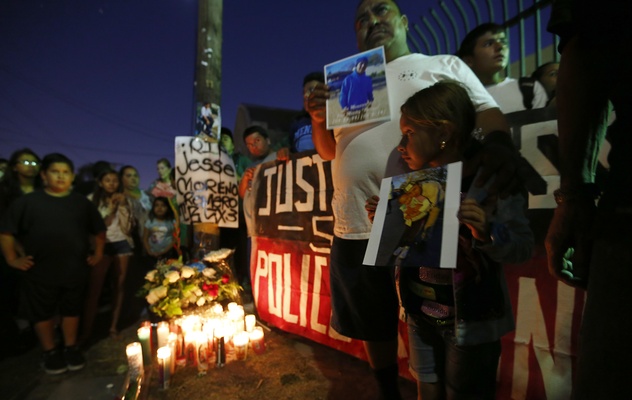 The suspects were described as being between 14 and 16 years old, and when officers arrived, one of the youths ran east on Cesar Chavez then south onto North Breed Street.

“According to a witness, they saw the subject running from the officers. The witness saw the subject shoot a handgun in the direction of the pursuing officers,” Arcos told reporters.

As officers approached Breed Street and Cesar Chavez, they heard a gunshot, he said. When they arrived at the corner, one of the officers fired at the boy, killing him.

Police recovered a loaded handgun, which will be processed for fingerprints and DNA, he said.  Investigators are also looking into whether the revolver had been fired.

Romero was pronounced dead at the scene at 6 p.m., according to coroner’s records.

“While the loss of life is particularly tragic, it is particularly so when the loss involves a youth,” Arcos said. “The tragedy of this event cannot be understated. In a community where violent crime continues to rise, particularly gang crime, this event underscores the need for youth programs and outreach, which could provide opportunities and alternatives for the youth of our community.”

The officers were wearing body cameras, he said. Investigators are reviewing the footage, which will be compared with other evidence, including witness and officer statements.

Police had initially identified the suspect as a man in his 20s. No officers were injured in the pursuit or shooting, which happened in a commercial district in the Eastside neighborhood.

Although Arcos declined to say whether Jesse was involved in gang activity because the investigation is ongoing, he said Hollenbeck officers keep tabs on 34 gangs, four of which are violent and active in the area of the shooting.

The second suspect, who was not armed, was later detained, Arcos said.

At the dead boy’s home, his mother, Teresa Dominguez, 36, sat inside a cramped one-bedroom apartment amid bouquets of flowers sent by mourners and burning candles. She said she could not understand why the police would shoot someone so young.

“It was not right for them to do what they did or kill him,” Dominguez said. “That’s why they are trained as police officers. Not to kill him.”

Born in Puebla, Mexico, Jesse was a year old when he and his single mother came to the United States and settled in Boyle Heights. Dominguez said she works in the shipping and packing department at a produce manufacturer.

The boy’s mother said she didn’t think her son was involved in gangs and didn’t know where he would get a gun. She said he mostly hung out with two friends who would come over to their home and play video games.

Diane Covarrubias, a family friend who stopped by the family’s home on Wednesday, said Jesse was enrolled in Soledad Enrichment Action’s gang program that works with high-risk teens and was making a lot of progress.

Earlier Tuesday, Jesse went the gym to work out. Later, friends and family found out that he was killed, she said.

As news of the shooting began to spread through the neighborhood, residents described a different series of events that led up to the shooting. A woman who said she witnessed the shooting and who would only identify herself by her first name, Norma, said she was in a car stopped at a traffic light at Cesar Chavez and Breed Street when she saw someone running from Chicago Street.

He was pulling up his basketball shorts, which appeared to be falling down, she said.

As the runner turned onto Breed Street, he pulled a handgun from his waistband and threw it toward a fence, the witness said. The gun hit the fence and fell to the ground, and she heard the weapon fire, she said.

At that moment, she said the runner turned around and appeared startled. She heard two more gunshots and the runner fell, she said.

Moments later, officers placed handcuffs on him, she said.

“He didn’t shoot,” the woman said of the runner.

Word of Jesse’s death spread quickly Wednesday at Hollenbeck Middle School, where Jesse was a student.

"He was a bright, smart kid," campus aide Ramon Gomez said. “To see him go like this, I never expected this."

Gomez said he often saw Jesse hanging out with friends, and was surprised to hear that the boy was carrying a gun. "It's hard," Gomez said. "It's difficult, you know, these kids."

On Wednesday morning, the streets were still covered with evidence from Tuesday's violent scene. Chalk markings were laid out on Breed Street, near Cesar Chavez Avenue, and blood spots spattered the sidewalk just around the corner from El Rincon De Ross ice cream shop.

A makeshift shrine had been arranged near a graffiti-covered power pole, which bore a small photograph of a smiling boy. Surrounding the photograph were several burning candles, three red roses, a Virgin Mary figurine and a potted cactus with a prayer card.

The mother of 10 children has seen the aftermath of violence before, she said. As she looked over the shrine, she recalled a recent officer-involved shooting on Lorena Street, a shooting that involved three men at a neighborhood bar.

"The violence here in Boyle Heights is escalating," she said.

The community,  she said, needs more programs for teens and fewer guns on the streets.

"I feel the loss. I have a 16-year-old," Ramirez said. "But I feel for the officers too. They are overwhelmed."

Following an LAPD news conference Wednesday, the ACLU of Southern California released a statement saying it was “particularly concerned” by the killing and argued that the department should change its body camera policy so that recordings are made public.

“Under current policy, LAPD will show the body camera footage to the officers involved before they make an initial statement, allowing them to tailor accounts to the details they see on video,” wrote the group’s executive director, Hector Villagra.

“At the same time, LAPD will keep the video secret from the public.”

On Wednesday night, a vigil was held. There, women and children stood side-by-side, holding votive candles and signs that read, "El pueblo unido for Jesse (The people united for Jesse).”

Another stated, "No más madres en luto (No more mothers in mourning).”

Do you have information to share about the life of Jesse James Romero ? The Homicide Report needs your help. Please fill out this form or e-mail us at homicidereport@latimes.com.

Share a memory or thought about Jesse James Romero

I saw the video here:
https://youtu.be/kmmS6uVNDKU

So, to me, the sequence of events may go like this:

looks 22 from the picture. dynamics is a subject i am familiar with. i have a gun illustration book. i think you can throw a gun down all day and not get it to fire. he might have thought he could delay them by him getting it to fire.

Correction Police are trained to shoot and kill, if this kid was stupid enough to run, point a loaded weapon and shoot at police officers then the officers have no choice but to return fire that's what their trained for like or not when they draw their sidearm it's best to follow and comply with their commands because their not out there here playing around they mean business

My sympathy to the family,but It's sad that this young man lost his life at the hands of police officers,my hope is that the officers were wearing body camera's, and if not I hope that there are surveillance cameras in the area that might have caught the shooting.I don't understand how some parents, can just allow their children at such a young age,, too run wild in the streets, with people who do not have their best interest in mind.

The police videos are held private by the LAPD so they can make a case against the victim and favor the cop's actions. Once the video is release, if ever, to the public they will have a one sided story siding with the cop's actions. They will only align the video with witness' statements that align with the video and everything else that contradicts it will be left out. This is how our judicial system does it as well and this is the reason the majority of killer cops are acquitted of committing murder. Welcome to Nazi America!