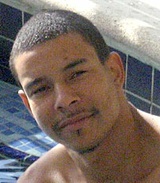 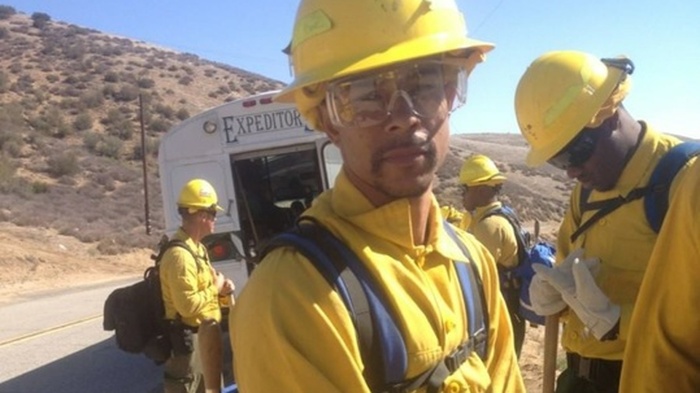 Jhonathan “Poppy” Jasean Oliver, a 32-year-old black man, was shot and killed Tuesday, June 21, in the 1400 bock of West 102nd Street in the Westmont neighborhood of South Los Angeles, according to Los Angeles County coroner’s records.

Oliver, a graduate of Van Nuys High School and former wild lands firefighter, had recently returned to Los Angeles to help his 91-year-old grandfather, who had lived in the neighborhood for more than 50 years, said Camille Hubbard, the mother of their two sons, ages 4 and 5.

Hubbard said she and their sons flew in from Chicago and arrived at 8 p.m. at the house where Oliver was staying with his grandfather. The family walked to a nearby Taco Bell, she said, but when they brought it home they realized they hadn’t gotten anything for the kids to drink.

“Poppy said he’d run down to the liquor store to get some juice, and while he was gone I heard four gunshots,” Hubbard said. “I called his cellphone three times, and he didn’t answer. After the third call, I heard the police sirens and my heart dropped to my stomach. I told the kids to stay in the room while I went outside. I looked two houses down and saw him lying there.”

Witnesses told investigators that Oliver was walking west on 102nd Street around 9 p.m. when a man got out of a white SUV parked along the curb and began shooting, hitting him multiple times, said Los Angeles County Sheriff’s Lt. Steve Jauch.

The gunman, described only as male, then got back in the SUV, which headed west on 102nd Street until it was out of view, Jauch said.

Oliver was pronounced dead at the scene at 9:31 p.m. with multiple gunshot wounds, according to the coroner's records.

“At first I didn’t see any wounds on his front side, and I kept telling him to get up,” Hubbard said, “Then I looked at his side and he had all these bullet holes in his side. I couldn’t breathe, and the policemen pulled me away. We’d just gotten off the plane. The boys were so excited to spend the summer with their dad. I just couldn’t believe it.”

Hubbard said she believes Oliver tried to lead the gunman away from his family’s house. “Looking at the blood splatters, he was just a house away from us when he got shot the first time,” she said. “I think he realized they were going to follow him with that gun, so he turned around and ran the opposite direction. He sacrificed his life for his granddad and his kids.”

Oliver and Hubbard had been living in Chicago for three years, close to her family and where she grew up, she said.

He tried to get work as a firefighter there and was working with a moving company, or as a handyman and gardener in the meantime. He was constantly helping friends and family with projects around their homes, she said.

His plan was to get back into firefighting, she said, but more than anything, Oliver was looking forward to a summer with his sons and his older daughter, who turns 8 on the Fourth of July. The last thing he told them, she said, was how they were going to fix up some of his grandfather’s old boats to do more fishing.

“He was just so excited for his boys to be out here with him in California,” she said. “He was a family guy; all he cared about was his kids.”

After the shooting, Hubbard returned to Chicago to be with her family, waiting for the funeral and trying to make sense of what happened. People in the neighborhood told Hubbard that the shooter got out of a white BMW X5 and that there was suspicion that a Lexus behind the BMW might have also been involved.

Oliver had never been involved in gangs, she said, or even been arrested, but she wonders if he was targeted because he was an unfamiliar face in that neighborhood.

“His mom told me when Poppy first got there, she made sure she introduced him to everybody on the block. But maybe the people who shot him lived two blocks over and they’d probably never seen his face before,” she said.

“It’s crazy -- this world is crazy. I wish he had just stayed in Chicago. We have our problems there, but it was probably safer than him coming back home. ... He wasn’t even home for a month.”

Do you have information to share about the life of Jhonathan Jasean Oliver ? The Homicide Report needs your help. Please fill out this form or e-mail us at homicidereport@latimes.com.

Share a memory or thought about Jhonathan Jasean Oliver

Utterly disgusting, this is the reason why there is a hell, Heaven could never be Heaven with these demonic animals there. May God comfort and keep Jonathan's family and loved ones.

Such a sad situation,as minorities we are making it harder on others that is trying to get by in life and provide a safe environment fir our kids. I moved out LA over 20 years ago. I managed to do well now i am faced withvthe reality I forced to go back to crime infested city. Because the I have been priced out of my comminity to the point I and my family is homeless.my only son who is 11 now I worry day and night for him. Condolence goes out to this young man family. Trust and belive black lives really do not mstter. If we did matter somethong would be done.

This is so senseless and may he Rest in Peace. A young man with a sense of purpose in life and it's ended so tragically. May the family be at peace during this time. Be blessed.

This is disgusting and disturbing. These cowards didn't even have the heart to allow him to say he didn't gang bang or he's from out of town. My condolences to the family.

Lost for words. May he RIP. I believe Gods word, blessed is a man that gives his life for a friend. Love u Jonathan.

I known Jonathan as kali..he was a great guy..funny..motivated..and loved his kids..he also was a good friend..when he left and went back to Westmount. .he always called me as soon as 5pm hit when I got off work..we face time of Facebook and he would talk to everyone that was on Atlantic st..his friends....we really miss him and I hope they find the evil that killed him..our prayers goes out to the family and his Lil ones..

RIP Poppy...
Every description of Jhonathan in this article is true.
He convinced a woman not to commit suicide before. My nephew! He is loved and his life matter to us.
The violence need to stop! Thousands of people are heartbroken behind his murder.

Race is part of our identity. When you live in a multi race community the paperwork must stipulate your race,gender, and age if known. We should all pray for the human race.

I can't believe my nephew is gone behind a senseless act of violence. He was a good guy who loved life, loved family, loved people, and above else loved his kids. Love you Pops and you are truly missed!

Jhonathon was a good friend I will truly miss him.

Jhonathan was a good family man who never was in trouble with the law , he was my soulmate, my best friend and the father of my two sons ages 4 and 5 , they now have to grow up without their daddy, he had a big summer planned for him and his kids and someone took him from us, he sacrificed his life for us because we were in the house at the time of shooting , he led the shooter the opposite way so we wouldn't get hurt , he was a good man in California and for the 3 years he lived in Chicago he was a good man and friend to everyone as well . He will live through his sons , may he rest in peace .