A man was sentenced Feb. 1 to 181 years to life in state prison for killing three people and trying to kill another during a 2014 shooting rampage in Pasadena, according to the Los Angeles County district attorney’s office. 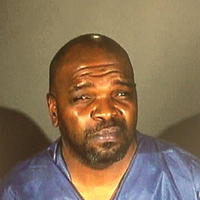 John Izeal Smith pleaded guilty in December to two counts of first-degree murder and one count of second-degree murder in the deaths of Maria Teresa Aguiar, 59, Luis Fernando Aguiar, 61, and Jose Hernandez Iribe, 31.

On July 12, 2014, Smith got into a confrontation with Maria Aguiar, grabbed an assault rifle and opened fire. Aguiar was killed along with her elderly father, Luis Aguiar. Smith then turned the weapon on neighbors, killing Iribe.

Smith barricaded himself inside a house and called police. He shot at several people, including a Pasadena police officer, but no one was hurt, and he later surrendered.

To the editors: I saw "Aguiar was killed along with her elderly father" and saw the age "Luis Fernando Aguiar, 61" and thought holy hell, 61 is now considered elderly?? then saw on the sidebar that he was really 91, you might want to correct that!

I wonder if the Mexican Mafia gonna put out a murder order on this black man?