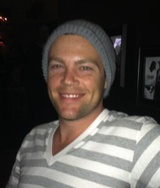 John Winkler, a 30-year-old white man, was mistakenly shot by Los Angeles County sheriff’s deputies Monday, April 7, in the 900 block of Palm Avenue in West Hollywood, according to sheriff’s officials.

About 9:30 p.m., deputies responded to a report of a man with a knife in an apartment complex, according to a news release from the Los Angeles County Sheriff’s Department.

When deputies arrived, they were directed to an apartment where the knife-wielding man was said to be. Deputies were told that there were two men who lived in the apartment, and the man with the knife was white with a thin build and a black shirt.

A sergeant directed an entry team, along with deputies armed with “less than lethal” weapons. The team staged itself outside the front door of the apartment and announced themselves, but no one responded.

As deputies tried to get a response, the apartment door suddenly opened and a man came rushing out. The man was bleeding profusely from his neck.

At the same time, Winkler ran out, “lunging at the back of the fleeing victim.”

“Both ran directly at the deputies,” according to the release.

Deputies believed Winkler was the man with the knife and that he would attack them, so “three deputies fired their duty weapons at him.”

Winkler fell to the floor along with another man, who was struck once by the gunfire.

Once the apartment door was open, deputies heard the sounds of a fight coming from inside. Deputies went into the apartment and saw two men fighting.

A man, later identified as Alexander McDonald, a 27-year-old white man, had allegedly overpowered the other man and was choking and tearing at the man’s face.

The man was “about to go unconscious” according to the statement, and a large knife was near them. The deputies used “physical force” to subdue McDonald, who was taken into custody.

Deputies learned that McDonald allegedly held Winkler and two other men “captive in his apartment” at knifepoint.

In a rage, McDonald allegedly began stabbing the men and fighting with them as the deputies arrived. One of the men was McDonald’s roommate. Winkler and the other man were visiting.

Winkler was taken to a hospital where he was pronounced dead.

McDonald has pleaded not guilty to a count of murder in addition to two counts of attempted murder and torture.

Winkler, who was from Washington, moved to Los Angeles in 2013 to pursue a career as a producer. Before his death, Winkler was full of hope because he got a job on the popular Comedy Central show “Tosh.o.”

“He called home and had to tell everybody,” said Lisa Ostergren, Winkler’s mother. “He was so excited. He’s finally made it. He’s in the door. He told me that he was going to work really, really hard.”

His family filed a claim in May against L.A. County seeking $25 million. The claim alleged that deputies should have recognized that Winkler wasn’t the man they were looking for because a tenant in the building showed them a picture of the alleged attacker before the shooting.

“John Winkler had committed no crime. He had no weapon. He had made no offensive moves toward the sheriff’s deputies,” the claim states.

Do you have information to share about the life of John Winkler ? The Homicide Report needs your help. Please fill out this form or e-mail us at homicidereport@latimes.com.

Wow, these officers have to deal with crazy stuff, no wonder they end up killing the wrong people most of the time.