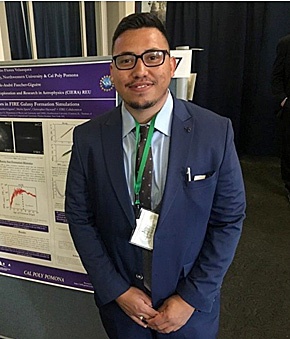 Jose Antonio Flores Velazquez, a 24-year-old Latino, was fatally shot on Wednesday, Aug. 14,  in the 1100 block of East 68th Street in the Florence-Firestone area of South Los Angeles, according to records from the Los Angeles County Department of Medical Examiner-Coroner.

Flores Velazquez, a doctoral student in astrophysics at UC Irvine, had come back to his old neighborhood to visit his family and drop off a baby shower gift to his childhood friend, Alfredo Antonio Carrera, 24, said Los Angeles County Sheriff's Lt. Derrick Alfred.

The shower was scheduled for that coming Saturday, to honor the first child of Carrera and his girlfriend, Marilyn Cuevas, The Times reported. Flores Velazquez couldn't attend the shower, but he wanted to make sure Carrera got his gift— a physics book for children.

"He was just delivering presents, being a great friend that he was," his brother Jason Flores told The Times.

For Carrera, it was a rare time off. He'd postponed his studies at Cal State Northridge to become a state safety inspector so he could take a job to prepare for the coming of his first child — a son — in September.

The two friends were standing in Carrera's driveway about 7 p.m. when a dark-colored sedan drove up and someone inside began shooting.

Gunfire struck both men, plus a third man nearby, who was leaning inside his pickup truck, strapping his baby into her car seat.

When he heard the gunfire, the third man jumped inside the truck, shielding his daughter's body with his own. The bullets went through the door, striking him in the back, Alfred said, but the door blunted their impact and that father survived. His baby was uninjured.

The two friends were not so fortunate.

Flores Velazquez, the PhD candidate who was considered a rising star in the field of astrophysics, fell onto the street of his childhood home, where he was pronounced dead at 7:16 p.m., according to coroner's records.

Carrera, the father-to-be who was saving to get an apartment for his wife and son, was taken to the hospital, where he was pronounced dead just 41 minutes later, at 7:57 p.m., according to coroner's records.

The cause of death for both men was listed as gunshot wounds to the torso.

Other people were on the street that night and reported seeing at least two people in the sedan, Alfred said. They also reported hearing people yelling before the shooting, but investigators don't know if the suspects were yelling at the two friends, or shouting at each other.

Witness accounts and surveillance video helped investigators identify the sedan as a blue 2004 Nissan Maxima with body damage—a missing rear bumper and hubcap, damage over the left rear tire and collision damage to the trunk lid, with California license plate of 5FUP2228.

A description of the car went out to law enforcement and on Friday, Aug. 16, Santa Clarita deputies spotted the car near the corner of Via Princessa and Sierra Highway, and arrested Jonathan Charles Johnson, a 27-year-old black man who lives in Lancaster but frequents the L.A. area, Alfred said.

Johnson was with a woman who was initially detained but then released when investigators determined she wasn't involved in the shooting, Alfred said. Investigators believe Johnson came to the area that day to attend a school orientation for his girlfriend's daughter.

On Aug. 20, Johnson was charged with two counts of murder, one count of attempted murder and discharging a firearm from a motor vehicle. His arraignment has been continued to Oct. 22 in the Los Angeles County Superior Court's Norwalk Court in Department SEJ.

The shooting is believed to be gang related, even though none of the three victims was involved in gangs, Alfred said.

"Our information indicates that the suspect has strong gang ties," Alfred said, with a gang whose members are predominately African American.

Investigators believe the suspects were driving around the Florence-Firestone area that night, in the territory of a rival, predominately Latino gang, looking for someone to shoot in retaliation for an earlier shooting that killed a member of their gang, Alfred said.

"We think they shot the first Hispanic guys they could shoot," Alfred said. "These guys [Flores Velazquez, Carrera and the man in the pickup] were caught right in the middle. None of them were gangsters, they were just in the wrong place at the wrong time."

Based on reports earlier in the evening, investigators believe the Nissan "made a few laps" in the Florence-Firestone area before the shooting, Alfred said, with someone inside brandishing a firearm at people on the street. Investigators hope some of those victims will come forward to help identify other suspects, he said.

An online fundraising account has been set up to help Flores Velazquez's family. A similar account for Carrera is no longer accepting contributions.

Do you have information to share about the life of Jose Antonio Flores Velazquez ? The Homicide Report needs your help. Please fill out this form or e-mail us at homicidereport@latimes.com.

Share a memory or thought about Jose Antonio Flores Velazquez