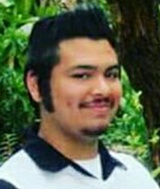 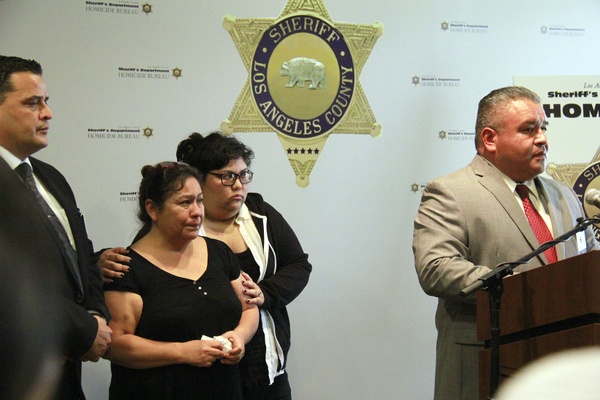 Juan Manuel Vidal, a 25-year-old Latino, was shot and killed Friday, Oct. 21, in the 9200 block of Flair Drive in El Monte, according to Los Angeles County coroner’s records.

Vidal, a recent pharmacy tech graduate, was working at the drive-through window at a Jack in the Box restaurant about 7:40 p.m. when a man in tan cargo shorts and a mask rolled over the restaurant counter and into the employee area, Los Angeles County Sheriff’s Det. Adan Torres said.

The sheriff’s Homicide Bureau had a news conference Thursday afternoon to show short surveillance video of what happened next. Vidal and the gun that killed him are not visible in the video.

The camera captures the suspect, a fair-skinned male, wearing what appears to be a mask representing the video game character Mario, with a bushy mustache, large nose and a blue baseball-style cap with a shiny vinyl brim.

Lt. Mike Rosson said the shooter ran out the north side of the restaurant into a dark-colored sedan that was last seen heading east on Flair Drive.

Vidal was shot once in the chest with a revolver, Rosson said. He was taken to a nearby hospital where he was pronounced dead at 8:15 p.m., according to coroner’s records.

The events happened so quickly, it’s hard for investigators to know the motive, Torres said, but they don’t believe Vidal was targeted, and he was not involved in gangs.

Instead, detectives believe the shooting was a botched robbery attempt.

“If you’re able to slow down the video loop, you can see he (the suspect) fumbles with the gun when he jumps over the counter,” Rosson said after the news conference.

“I don’t think he was experienced at that line of work, and I almost believe that he panicked,” he said.

Looking at the shooting frame by frame, Rosson said, the suspect’s jerking motion “looks like a reaction to the gun going off,” rather than someone deliberately firing a weapon.

Detectives are looking at other videos of the shooting, Torres said, but wanted to get this particular footage out in the hope that someone could identify the shooter.

Torres asked the shooter and driver to turn themselves in. “Come in on your own,” he said “and tell your side of the story.”

Vidal had recently graduated from UEI College in El Monte with a pharmacy tech degree, and was interviewing for jobs at local pharmacies, said family members who spoke at the news conference.

“I was proud of him. He was a kind, loving man, but he’s always going to be my boy,” said Vidal’s mother, Mary Smay. She sobbed as she stood before the cameras, and her husband, Vidal’s stepfather Frankie Rivera, sobbed a few feet away.

Later, Rivera said his stepson was a generous, cheerful man whom he’d raised for 20 years. Vidal was born in prison to a drug-addicted relative, he said, and Mary Smay chose to adopt him, though he was born addicted, too.

Vidal was passionate about muscle cars, VW bugs and Rockabilly music, said his younger brother, Rudy Rodriguez. His favorite car was a Buick Special Deluxe that he painted black and white and named Christine.

The Jack in the Box where Vidal was shot was open but quiet Thursday afternoon. Family members greeted each other outside. There was no sign of the violence that happened the week before, except a poster on the counter, asking people to contribute to a fund to help Vidal's family.

His grandmother, Tina Rivera, remembered how he would always answer her calls, no matter what the hour, and take her to the places she needed to go.

“He was my pride and joy,” she said, sitting beside a display of candles and balloons outside the restaurant. “I think he was sent here to make people smile.”

Other family members remembered Vidal as kind and open-minded, but said he also had goals for himself and took pride in everything he did.

“He had a style all his own, and he didn’t judge people,” said Frankie Rivera. “He had lots of friends, people of all ages, and girls who were friends. Not girlfriends, but real friends, because he respected them and took care of them.”

Rivera paused and steadied his voice.

“You should see all his friends’ eyes … They are tormented by this,” he said softly. “He was pretty much a one of a kind.”

Do you have information to share about the life of Juan Manuel Vidal ? The Homicide Report needs your help. Please fill out this form or e-mail us at homicidereport@latimes.com.

Share a memory or thought about Juan Manuel Vidal

No one deserves to die or have their life taken away, but it's unfortunate that it happens all over this world. Many are just working, minding their own business or just get caught in the middle of a gun fight. I hate to see and read any type of story that involves a death, but unfortunately it happens all the time.

My nephew didn't deserve to have his life taken so young. The out pour of friends n their stories about how he reached out to everyone is heartwarming. He lived everyday his way n left his mark in the hearts of everyone he met. We love you mijo n promise to do all we possibly can to bring your killer to justice. You were like an angel to many in this physical world n now an angel in the heavens above. Guide us to peace n strength to see each day through without you.
Love, Nina