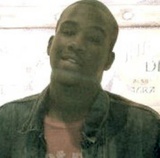 Julian Elijah Boston, a 24-year-old black man, was fatally shot on Friday, Nov. 24, 2017, in the alley behind West 104th Street in the Westmont area of South Los Angeles, according to Los Angeles County coroner’s records.

Boston was sitting alone in his cousin’s car, which was parked in the alley behind his aunt’s house, around 2:50 p.m. the day after Thanksgiving, said Los Angeles County sheriff’s Det. Ray Lugo.

Another car drove down the alley with three people inside, and someone in the car began shooting at Boston, striking him multiple times, Lugo said.

Boston was taken to the hospital, where he was pronounced dead at 4:55 p.m., according to coroner’s records. The cause of death was listed as a gunshot wound to the head.

His mother, Pilar Peynado, who lives in Providence, Nev., said she and her son had been talking on the phone just 20 minutes before the shooting. She said he was the father of two young girls and a boy, and was in Los Angeles trying to find a good job and spend more time with his children.

Lugo said investigators are trying to find witnesses to the shooting. They suspect the shooters may have gang ties, he said, but the victim did not.

“Boston was not at all a gang member,” Lugo said. “He grew up in the Apple Valley area [near] Victorville and had been staying with his aunt for the past few months. The family isn’t involved in gangs, his cousin isn’t a gang member; he was just a kid struggling to get by, trying to find his way.”

Do you have information to share about the life of Julian Elijah Boston ? The Homicide Report needs your help. Please fill out this form or e-mail us at homicidereport@latimes.com.

Share a memory or thought about Julian Elijah Boston

I miss my son more and more each day... he was my Juliebird and I pray for justice it will be 3 years this November.

was julian aka harlem a crip? i kno he went to fairfax high.. this is sad, they judged him and figured cause he looks like a gang member he was from the rival hoover gang smh