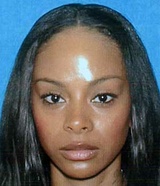 Katrina Rene Harris, a 28-year-old black woman, was shot and killed Saturday, May 10, in the 19700 block of South Enslow Drive in Carson, according to Los Angeles County coroner’s records.

Harris was at a family gathering at a home about 10:30 p.m. when a fight broke out in the street in front, said Lt. Dave Coleman with the Los Angeles County Sheriff’s Department.

People had gathered to watch the fight when a black man pulled out a gun and began firing at the crowd, striking Harris and a 25-year-old black man.

“It’s our understanding she was just a bystander,” Coleman said.

Harris was taken to a hospital where she was pronounced dead at 11:17 p.m., according to coroner’s records. The 25-year-old man who was shot is expected to survive.

Do you have information to share about the life of Katrina Rene Harris ? The Homicide Report needs your help. Please fill out this form or e-mail us at homicidereport@latimes.com.

Share a memory or thought about Katrina Rene Harris

I just wanted to say i really miss you trina there is not one day that i dont think about u or miss you. I remember at all the family events i used to always be right with you everywhere you go and i always loved to hang out with you. You always made me so happy and smile. I just really miss you and can't wait to see you again one day.

I just wanted to say i reallly miss you big sister and that there is not one day that i don't think about u or miss you. I remember at all the family events i would always be right there with you the whole time. i love you trina.

To m y loving, sweet daughter Katrina Harris. I miss you so much and I love you. I think about you all the time. the times we laughed watch movies together. Life will not be the same without you. I pray for you and know you are with God at peace and no one can hurt you ever again. Whatever animal did this is a thug who don't care about anybody's life. She was a mother, daughter, sister, niece, cousin and she loved life, but some THUG ANIMAL took her away from her loved ones. You can't hide from GOD. What goes around comes around and you better believe it!!!! "RIP" MY beautiful daughter Katrina Harris. Forever loved!!!
Ur Mom-Theresa

I'm am truly sadded by this news. I remember Trina as a young teenager and the first time she became a mom. I know how much your family loved you. When I read of your death I could not believe that such a senseless tragedy had occurred. This is just such a shock. I pray for the comfort of your family and may you rest in peace. I pray for justice!

My deepest sympathy to the Harris family, may you all find comfort, hope and strength from God's word the Bible at Acts 24:15 and Revelation 21:4

Hey Katrina big sister I really miss your laugh, your smile, your good nature in general. Every night I wish that you hadnt chosen to go out that night. I wish there was a time machine that would allow me to call you and talk to you that night. My 4 beautiful nieces remind everybody of you so much. I dont know why people choose to act foolish at parties when everybody is supposed to be having fun. I will see you again someday for sure and we'll have good times again.

Man Katrina I'm so speechless right now....our children and i miss you so much, i hate that this happened to u... So young sweet And innocent...i think about u everyday and i talk to our kids about u... I show them pictures to remind them of how beautiful their Amazing mother is... We love u baby and u are deeply missed and will never ever be for gotten... We will reunite some day until then i will carry on and take good care of our children.... I love u and so does our children as well as the family and all your true friends... I know ur bday is coming in about a week..happy birthday my Queen🎂🎂🎂🎂🎉🎉🎉🎊😙😙😙

Someone knows who committed this terrible crime and should come forward to give this family some sense of closure.

so sorry to hear about your loss...i wish and pray that someday we could all just get along, have a party and have a good time, eat, dance and laff, and walk your guest to the door, and watch them leave...those were the good ole days....i refuse to go to parties now, because these days out of all the guess you invite, some hard head is packing some kind of weapon. it makes me think, AM I THE ONLY ONE IN L.A. WHO DON'T CARRY A GUN...may GOD give the family strength to carry on, the fathers name sounds like a name i remember from class of the 70's of LOCKE HIGH SCHOOL, if you are, i'm praying for you GOOGIE, so hard to be a LOCKE HIGH SAINTS...........GOD BLESS

Words cannot express how I feel when hearing the news about my little cousin katrina i got the news about 4 in the morning about the death of katrina as I cried and cried. ..and ask why...why her I started thinking about her 4 young daughters... who could do such a thing...she was so young, smart, intelligent and beautiful...katrina we love
You and miss you and you will forever be in our hearts...rest in heaven trina!

Katrina was my little sister. As a sibling and being older you want to keep your little brothers and sisters out of harms way. That night I will never forget being woken up by my sister saying something is wrong with Trina we have to go to Carson. Not knowing you were gone already. Driving on the freeway praying all the way to the hospital. Getting there still praying. Waiting and waiting. Then finally a doctor shows up to tell us you didn't make it. My world went spinning and I felt like falling to me knees but God held me up and all I could think of were my niece's. I kept saying we have to get those babies and holding my stomach. I look at my nieces and see you. I hear you. The arguments they have with each other it was us all over again so I smile. I love you Trina. We now need justice! We need people to come forward and be honest and speak on everything. They have awaken a sleeping giant and it's name is our family...

Katrina was a beautiful and loveing Aunty. I've only see her 2 times when I was 1 years old but she still is my family. She did not even get a chance to live to be 30 years old. My father and I were really sad when we went to her funeral on May 29, 2014. Aalysia my cousin was really brave on that day I for one was not. R.I.P Katriana Rene Harris forever in our hearts.

I am so sorry to hear about the death of this woman. My heart goes out to her family.

Katrina was a loving mother its sad to say that a beautiful angel had to die so soon.She left me and 3 beautiful sisters.May she rest in peace in Heaven(I love you mom so much)you may be gone but never forgotten.

Katrina my beautiful loving daughter, I miss u so much. I was so blessed when we got to talk Saturday afternoon.All the tears I lost, the heartbreak shows how much I love u. Remember u told me u love me Saturday? well ( I Love U Still And Always Will ). LOVE U, ur Dad