On the fourth anniversary of the killing of her 22-year-old son, Techea Adams isn’t remembering him quietly.

Instead, Adams will be walking the Compton streets where he took his last steps in the hopes of drumming up more tips for investigators. She knows that someone in the neighborhood must have seen something that day.

“I’m just hoping that they have some compassion and open their mouth,” she said. 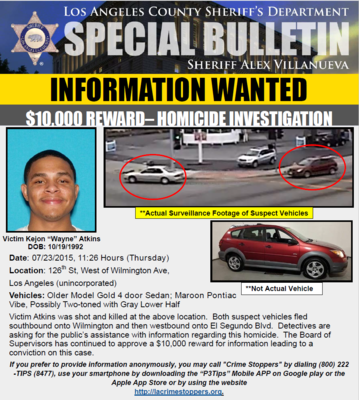 She will then walk east to where her son was shot, stopping at the exact spot at the exact time of his death.

On the morning of July 23, 2015, Atkins blew his mother a kiss before he stepped outside his home to go running with a friend.

Moments later, another neighbor pounded on her door, informing her that he had been shot.

Detectives haven’t made an arrest but released a photograph of a possible suspect's vehicle in 2017.

Authorities have previously told The Times that the gunman was in his late teens to early 20s, with several tattoos on his back. Two or three other men were also believed to have been in the car, which was last seen going west on El Segundo Boulevard.

Surveillance cameras captured images of the car as well as a two-tone, maroon/gray SUV, possibly a Pontiac Aztec, which might have been following along.

Atkins was a student at Long Beach City College. He loved to travel.

Adams has since moved out of Compton but said she will not give up the fight to find who shot her son.

She has even set up a GoFundMe page to raise money for a reward, in addition to the $10,000 that the Los Angeles County supervisors are offering.

“I have to get justice for my son,” she said. “I want them to see what they’re doing. Maybe if they see my pain and they see other people’s pain, then they’ll wake up.”

Anyone with information is asked to call the Los Angeles County Sheriff’s Department Homicide Bureau at (323) 890-5500. Those who wish to remain anonymous can call Crime Stoppers at (800) 222-8477.

Thank you so much for the information. It was truly appreciated. I pray for you and all the Individuals committing these senseless crimes and the individuals keeping the murderers secrets. Your just as guilty as the person who pulled the trigger. I pray God loose your tongues and my Son Kejon Wayne Atkins face hunt you for the rest of your lives and all of you will not have any peace until his murders face their sins here on earth. I also pray that YOUR Mother does not every have to Fill A Piece Of Their Heart Ripped Out. #KejonsLifeMattered. Unlike you, I'm not hiding my identity.

From what I believe this was a case of mistaken Identity..and two different gangs 1 from Long Beach one from Compton??..I guess they was looking for someone that had just did something and in the spur of the moment saw this young brother..sorry for the loss good bless things are weird these days..becareful because you never know what someone else got going on and they bring those bad vibes around..keep your toxic lives to yourselves in your toxic houses or hoods people trying to live..