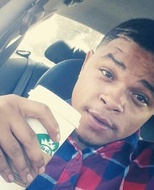 Los Angeles County sheriff’s Lt. Victor Lewandowski said Atkins was standing on the sidewalk about 11:30 a.m. on July 23 when a gold-colored sedan pulled up.

Someone inside the sedan fired multiple shots at Atkins, striking him in the head.

Atkins was taken to St. Francis Memorial Hospital in Lynwood, where he was pronounced dead on the 27th at 2:22 p.m., according to Los Angeles County coroner's records.

Lewandowski said there was no evidence the shooting was gang-related. No other suspect information was available.

Do you have information to share about the life of Kejon Wayne Atkins ? The Homicide Report needs your help. Please fill out this form or e-mail us at homicidereport@latimes.com.

Share a memory or thought about Kejon Wayne Atkins

I apologize for the delay Alex Hurtado. You can send the message to The homicide department of the LA Times or Detective Baljet in Homicide LA County Sheriff. They know how to reach me.

I just don’t get why witnesses aren’t coming forward if there’s a reward or just out of good morals . Unfortunately if you have sons or even daughters,these areas aren’t the place to raise them in. They either become affiliated with the gangs of the hood for survival or join . This man may or may not have been cya doesn’t 100% mean gang member . The guys in these comments are mad disrespectful for implying any of these murders are justified .

Take a Walk In My Shoes
In Rememberence of Kejon Wayne Atkins!
Sunday July 23rd 4pm
126th and Wilmington

Ms. Adams How Can We Get A Hold Of You

everytime July comes around, it saddens me! I just wish i got the chance to say goodbye...missing you

Thinking of you. It pisses me off that justice still hasn't been served on your behalf. I miss you and I love you. I pray to god they find the asshole who took you from your loved ones. I really miss you being here, you're still teaching me so much.

First things first, I send my condolences to the friends & family of Kejon Wayne Atkins, I’m sorry for your loss. Second, as hard as it may be the only way to deal with this character named “Meck” is to just ignore it. Notorious on the Homicide Report for posting unnecessary negative comments that otherwise wouldn’t have the courage to say such things to someone’s face. “Meck” is just a sad individual with a sick infatuation with taking delight on other people’s misfortunes.

To Meck and Reggie Noble, take your worthless opinions and ignorant conjecture to another forum. I am enraged to read such heartless comments on a thread about the death of a young man with a promising future. This isn't a game, this is real life and his mother has to read the insulting words you pigs write on here. Let Kejon rest in peace and stop slandering his name, have some common decency.

Everyone gotta hide behind a fake name when offering their 2 cents. At the end of the day. No one deserves their life taken away by the hands of another. No parent is suppose to lay their child to rest behind some nonsense.

— Reggie noble
It usually happens this way. Family says one thing and others say different. As in this case.

You are truly missed!

Staying hopeful that Kejon's Murders will be revealed soon In Jesus Name.

You are one of the most important people in my life. Even in your passing you have an unexplainable impact on me. I will never forget you , we shared something really special and I miss you "Dimples" 😔. I can't listen to a lot of songs today and not think of you ; you truly were an amazing energy and I just wanted you to play football cause that's what made you happiest. Still wish we could've done prom. I have every single letter.I can't seem to find that one picture of us... I know your watching me laughing at me type this , Just promise you'll watch over us all Angel 😇

My sincere condolences to the Adams and Atkins family 🙏🏾

I miss and love kejon dearly no he wasn't in a gang and that person using the alias "Reggie Noble" should b looked into that's the name of the rapper redman . my heart hurts for his mom and his family . kejon was a good man .he loved football since day one .what I love most about him is willingness to win ...won't back down from a bigger player older then him it didn't matter. Kejon loved his momma with all his heart .this hurt me as well as everyone who knew him.

For clarification, no he was not a crip. No he was not in a gang. And the majority of his associates were athletes. Yes, this is a cold world as you didn't offer condolences with your post. Just because you are cordial and speak to someone in passing doesn't make them your friend. Just because you grow up in Compton doesn't make you a gang member.

I keep watching the door waiting for you to walk back through. Words can not explain the pain I'm feeling. Singing 'Bandaids Don't Fix Bullet Holes' Please Please Stop The Violence!

Was he a compton crip? I knew he was in youth authority and camp as a youngster.. Most his friends are crips, it's a cold world

Kejon is my nephew I'm his aunti Pam I love him dearly and my heart bleeds for this right here!! I pray that this crime is solved soon and justice served in order to gain closure to ease the pain and to slow the tears . I love U very much Kejon U are missing in action but never forgotten or out of my heart
Souls RIP...

Kejon Atkins was my nephew whom I loved very much,he had the biggest smile on earth,my nephew loved family most of all been a big brother,love you Nephew.Aunty.

Please help find my little cousin killers. I'm praying for my west coast family. I love ya'll and I will continue to pray for ya'll.

I met Kejon Atkins in August 2000. I was his 3rd grade teacher. Kejon was always very smart and liked to stay ahead of the class. He was very respectful and woild do whatever I asked. I loved Kejon and my other students as if they were my own children, however, Kejon held a special place in my heart. He looks like my son.

After I stopped working at the school, I kept in toich with Kejon and his family. After some years had passed, I saw Kejon as a grown man; age 21. I would ask me to email him job offers and I would text him from time to time.

To know him was to love and respect him. He was a great kid and my heart aches because he didn't deserve to die like that. Whoever is the guilty party, may God have mercy on your souls.

Kejon grew up with my son's. He was like one of mine growing up. He was always a respectful, humble guy. I have never known of him being any other way..... It's still hard to believe I can't see him when I visit his mom and baby sister....😢😢💔~rip~ We love you KeKe💋~peaceful journey's my sweet nephew👼🏿

I will gladly provide you a picture of my son