Kelsey Camila Meza, a 17-year-old Latina, was pronounced dead on Wednesday, Dec. 5, in the 800 block of West Colorado Boulevard in Monrovia, according to Los Angeles County authorities.

Kelsey was found in her upstairs apartment along with her 41-year-old mother, Cecilia Meza, who was also dead, according to Los Angeles County Sheriff’s Lt. Derrick Alfred.

The mother’s boyfriend, Nimrod Perez Guerrero, 33, also lived in the apartment and is now wanted as a suspect in the double slaying, Alfred said.

The three lived across the street from Monrovia High School, where Kelsey was a senior. Tearful students gathered outside the apartment on Wednesday afternoon as investigators worked at the scene.

“There were lots of very upset children outside,” Alfred said. “She was liked by plenty of people.”

Monrovia School District Supt. Katherine Thorossian issued a statement on Thursday, saying the school would be providing grief counselors to students and staff “for as long as they are needed."

“Today was a hard day in Monrovia,” Thorossian wrote on the district's Facebook page. “Our students and our staff grieved for the loss of a friend, a student, a teen excited about going to college. The adults from elementary and middle school vividly remember a sweet, kind girl who always went out of her way to help others.”

Monrovia police officers were asked to check on the mother and daughter around 1 p.m. Wednesday, Alfred said. The officers knocked at the apartment door, and when no one answered, they climbed through an open window and found the two dead inside.

Investigators don't know how long the mother and daughter had been dead, Alfred said. The last reported conversation with them was on the Sunday before they were found, he said, and Kelsey had not attended school that week. 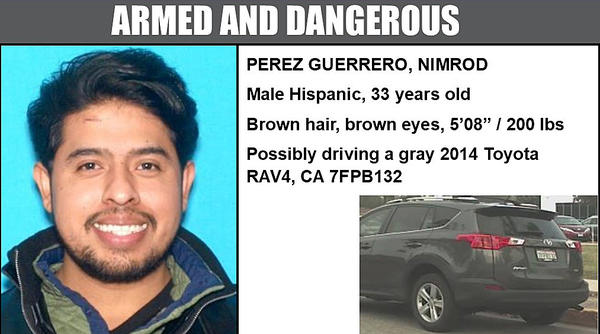 Meza’s boyfriend, Perez Guerrero, is described as a Latino with brown hair and brown eyes,  5-foot-8 and about 200 pounds. He is possibly driving a gray 2014 Toyota RAV4 with the California license plate of 7FPB132. He should be considered armed and dangerous, Alfred said.

Anyone with information is asked to contact sheriff’s Homicide Bureau detectives Eddie Aguirre or Tony Guillen at (323) 890-5500. Those wishing to remain anonymous should contact Crime Stoppers at (800) 222-8477.

Do you have information to share about the life of Kelsey Camila Meza ? The Homicide Report needs your help. Please fill out this form or e-mail us at homicidereport@latimes.com.

Share a memory or thought about Kelsey Camila Meza

camila was my best friend I can't stop missing her she was like a sister to me if she was still alive i would of told her thank you for being there for me and i felt like you were part of my family and before you were going to leave me i was going to ask you to come to my house to celebrate Christmas but i can't anymore cuz you left me you cared about your self and about others and that is what i liked about you but i know that she is still my bestfriend.

Kelsey was my best friend. It’s a strange feeling thinking every day that she’s actually gone. Seeing the coffin made me feel sick and hurt that my friend so young died just like that. It wasn’t fair that it happened to her and her mother but hopefully they lay at rest. Also I believe it’s good they showed my best friend race.. she was so proud of being a Latina, shows off her “Latina” side to me all the time and it made me happy to see her proud of her ethnicity.