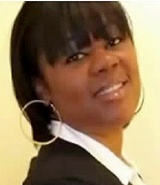 Kenia Buckner, a 31-year-old black woman, was shot and killed Monday, Jan. 16, in the 16200 block of Cornuta Avenue in Bellflower, according to Los Angeles County authorities.

Buckner was home with her three children around 1:35 p.m. when her ex-boyfriend, the children’s father, walked into her apartment, said sheriff’s Lt. Joe Mendoza.

“In front of their children, in their living room, he pulls out a gun and fires toward the victim multiple times, striking her at least one time in upper torso,” Mendoza said.

Buckner was pronounced dead in her living room at 1:48 p.m., Mendoza said.

Investigators are searching for the ex-boyfriend, identified as Antowan Parker, a 27-year-old black man, who was last seen running south on Cornuta after the shooting, Mendoza said.

No one else was injured, Mendoza said. Neighbors and family told KTLA-TV that the children, the oldest of whom is 7, ran into the street after the shooting.

“I heard gunshots, like just a boom while I was taking out the trash, and then I heard kids screaming,” a neighbor said.

Friends told KTLA that Buckner worked as a hair stylist while attending college to become a nurse. “She’d go to work; she’d go to school; she’d take care of the kids,” said Melanie Gammage, crying as she remembered her friend.

Do you have information to share about the life of Kenia Marie Buckner ? The Homicide Report needs your help. Please fill out this form or e-mail us at homicidereport@latimes.com.

Share a memory or thought about Kenia Marie Buckner

I am kenia Marie Buckner, she was my baby, and I love her, warm sweet personality, she will be missed, although I forgave Antowan Ladell Parker jr. I am still angry.. she didn't deserve this. A MOTHER'S LOVE. SHE WAS PRETTY AND SMART

Kenia started as my classmate, then our relationship grew, she was & still is family, we were in the nursing program together, we scheduled our classes together for next semester, I'm going to strive for nothing lower than a RN and I'm going to graduate for the both us. I love you ❤️