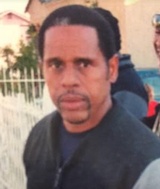 Kenneth Elliot Durden, a 50-year-old black man, was shot and killed Tuesday, Feb. 23, in the 6200 block of South Harvard Avenue in Harvard Park, according to Los Angeles County coroner’s records.

About 3:55 p.m., Durden was in the driver’s seat of his Cadillac DeVille when a man approached and fired multiple times, striking Durden, LAPD Det. Dave Garrido said.

The gunman then fled south on South Harvard Avenue in a car, possibly a four-door sedan.

Durden was taken to a hospital, where he was pronounced dead at 4:33 p.m., according to coroner's records.

Share a memory or thought about Kenneth Elliot Durden