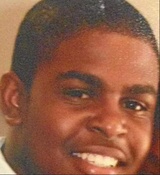 About 3:25 p.m., Brooks, a student at Rodriguez Cabrillo High School, was walking home when someone tried to grab his backpack then stabbed him, Long Beach Police Chief Robert Luna said.

The stabbing occurred near Stephens Middle School, where students were being let out for the day. Several good Samaritans tried to help Brooks, and were at his side when emergency crews arrived.

Brooks was taken to a hospital, where he was pronounced dead at 4:46 p.m., said Ed Winter, assistant chief of investigations for the coroner's office.

Brooks' father, Keeyon Layton, said his son was not a gang member.

"He did not deserve this," he said.

Neighbors in the area said workers at a small barbershop adjacent to the lot tried to help the teenager. Inside the shop early Friday, barbers stood quietly, trimming hair.

Giovanny Montelongo, an 18-year-old Latino, was questioned and taken into custody by Long Beach police the same day.

The crimes include special circumstances allegations that the murder was committed during a robbery and also committed in association with a street gang.

I love and miss my Grandson, he was an Angel, he always knew how to put a smile on your face , He was raised in a christan atmosphere, raised very well. He loved people including his family. If there was ever anything anyone needed keshawn would always be at the rescue. He was a happy boy, he loved church. In critical situation he never was the type to be revengeful . My baby has gone home to be with the lord. Someone may have tooken his life,but know that there is something they will never be able to take, and that is his dignity and his spirit. Keshawn you will ways live forever in my heart. Nana will always love you, you shall never be forgotten. I still wear apart of you around my neck the chain you gave me with the heart that says number one Nana, I will wear it as a badge of honor and in remembrance of you.
Love Always,
Nana, kristine

Too young to be taken from this world...Rest in Peace, Keshawn.