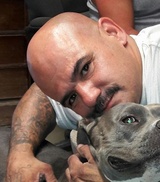 McMorries was sleeping in the garage of a home about 10 a.m. when he heard someone attempting to open the garage door, Los Angeles County Sheriff’s Lt. Steve Jauch said.

McMorries got up to open the door and was confronted by a man with a gun, who began firing.

McMorries’ girlfriend, who was also in the garage, told authorities that the gunman ran out of bullets, Jauch said, then fled on a motorcycle.

McMorries was taken to a local hospital where he was pronounced dead.

McMorries’ uncle, Steve McMorries, was in the house when he heard the gunshots. He ran outside and saw a man pointing a gun at his nephew.

“After about four shots my nephew went down,” Steve McMorries said. “He was still shooting him after Kurtis was on the ground.”

Steve McMorries ran back into the house and locked the door.

The shooting, which took place in a residential neighborhood, shook neighbors. Hermes Arriola, 59, who lives on the block, said he moved to the area last year and initially thought the gunshots were fireworks.

“I said ‘Happy New Year!’” Arriola said. He didn’t know someone had been shot until he saw police cars speeding down his street, he said.

McMorries’ family said the victim knew the gunman -- in fact, they had been friends for 25 years.

Jauch said that a suspect was arrested later that day after firing a weapon inside the warehouse where he was living on Vermont Avenue.

The suspect was Aramis Wong, a 46-year-old Latino, according to police and court records. Two firearms were found in the warehouse, Jauch said.

“You wouldn’t think that would happen, two best friends and it would come down to that,” Steve McMorries said. “They used to [call] me Uncle Steve and talk to me about their problems. We don’t know why this happened.”

Wong was also charged with one felony count of possession for sale of methamphetamine, according to Ricardo Santiago, a spokesman for the district attorney's office.

Wong pleaded not guilty, according to the district attorney's office.

McMorries, a father and a tattoo artist, was an outgoing person who mentored and helped his friends, family said.

McMorries’ uncle has been living in the house where the shooting took place for 40 years.

“It hurts,” he said. “The closer I get to the house after being out the more tears just come from my eyes.”

Do you have information to share about the life of Kurtis Wayne McMorries ? The Homicide Report needs your help. Please fill out this form or e-mail us at homicidereport@latimes.com.

Share a memory or thought about Kurtis Wayne McMorries

This is a tragic event for both parties involved... Families parents children friends are all devastated and gravely wounded over this... Oddy is my daughters stepfather and he is like a brother to me my family oddys family his ex wife's family are trying to work passed this his daughter Nina and his grandson Christian are torn over this... My condolences to the family of the deceased... It's hard to believe what happened....

I feel very late finding out this information that as of last night I was informed that kurtis was gone. I've known him for 18 years. He was definitely my first love. We went down one crazy little road together quite a few years back I learned quite a bit from that man good and bad but no matter what he had the biggest heart there ever was he loved unconditionally. His pride definitely was his family and his children. My heart is broken to think those children will go one day without having that man of this world. The world feels just a little empty without having his goofy self here. I will love you always and forever kurtis. Thank you for the love that you showed me and shared with me now rest in peace sleep well watch over all your babies until we all meet again.

Hey Kurtis's I'm going to miss you bro. Whatever it was that caused this tragedy I hope God forgives the person who did this to you. Being that u were a man who studies the word of the Bible I I know that you are good up in God's embrace and looking over us. Love you bro

I knew Kurt is for close to 25 years. I knew the old Kurt , and I wish I would've got to know the new one a little better. This just SUCKS anyway you cut it....I pray for kurtis' family and children, and I know for certain that he is at peace with the Lord now...

Kurtis was a fun loving guy. I have known him for many years. I have had the oppotunity to pray with him laugh with him and even cry with him. He loved his children with all he had. He had his struggles like we all do. He loved the Lord. He had a great sense of humor and was very silly. I will miss that about him. God have mercy and grace on this mans soul... Love you and may you dwell in the heavens with our Father....

Kurtis and I have been married in Aug. 29, 2009. We have 4 beautiful children. Kurtis has 10 amazing kids he was so very proud of and loved so very much.We have been through many struggles and hard time but if it wasn't for our great times I would not feel the lose I have today. Kurtis has had many hard struggles but from the bottom of his heart he excepted and loved God with all of his heart. Kurtis led many inmates to the Lord and has helped many others in the rooms of Alcoholics Anonymous, and shared his amazing experience strength and hope to so many that could relate to his amazing story and made so many great changes in his life because of having excepted Jesus. Life was definitely a spiritual battle. I had to make a decision 3 years ago for the best interest of me and the kids and that was to move away to protect us, and have been waiting and hoping, and praying for our restoration if it was God's will. Lord knows he tried hard to do what was right. But being given the events I'm forever grateful and thankful I did, and very heartbroken that this has happened. I know that our Heavenly Father has brought Kurtis home so that the demon's no longer can mess with Kurtis and he can be free of his many bondage's, but it still doesn't make it easy at this time to understand why or how he could be one of the many survivors. Kurtis is truly loved by so many family members and friends that have prayed so hard for him and with him all of his life. His life was cut far too short. May he rest in peace now.