LAPD officer was unjustified in killing a man who zapped his partner with a Taser, panel finds 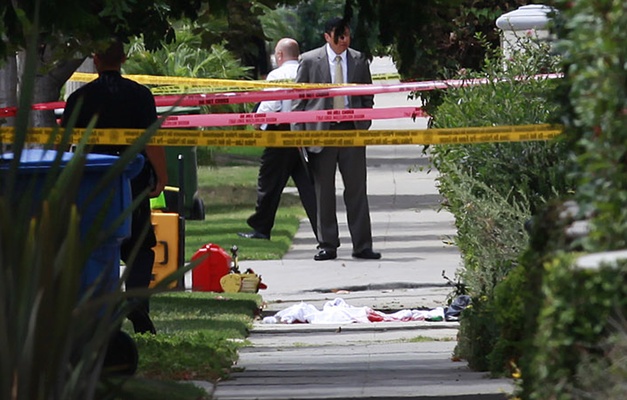 The rookie Los Angeles police officer screamed, her body shaking, as the 38-year-old man zapped a Taser against her thigh.

The man, Neil Peter White, was struck in the back of the neck and killed.

"I honestly thought he was going to go for a gun," the officer later told investigators.

Shuff's reasoning for firing his gun during the July 2015 struggle was rejected recently by the city's Police Commission, which sided with Chief Charlie Beck and determined the officer violated LAPD policy for using deadly force.

In his recommendation to the commission, Beck cited the minority opinion of an internal LAPD board that also reviewed the shooting.

Two members of the board noted that Shuff couldn't see White's hands and there were no "additional factors" suggesting White was in fact going for the rookie officer's holstered gun.

"Simply believing White was going to gain control of [the] service pistol ... did not constitute an imminent threat of death or serious bodily injury," the two board members concluded.

The Police Commission also faulted the tactics used by Shuff and his partner leading up to the deadly encounter, saying some of their actions "unnecessarily compromised the safety of the officers."

Shuff's attorney did not immediately return a call for comment.

The case marks one of a handful of shootings by on-duty LAPD officers last year in which police commissioners have determined the officers violated department rules for using deadly force.

This year, the board faulted the officers who opened fire in two deadly shootings of unarmed men -- one near the Venice boardwalk, another in Burbank.

The union that represents rank-and-file officers has criticized commissioners for some of those rulings, particularly their decision to fault an officer in the deadly 2014 shooting of Ezell Ford, a mentally ill black man who was killed as he walked near his home in South L.A.

Although the LAPD found that Ford struggled with the officer over his department-issued gun, the commission decided that the officer did not have a reason to stop and detain Ford in the first place.

His handling of the encounter, the panel concluded, was so flawed that it led to the fatal confrontation.The commission's ruling was welcomed by Ford's family and others who had protested the shooting.

But police union officials warned that the decision had roiled officers, prompting concerns that they would be unfairly judged for proactive policing.

Two reports -- one from Beck, another summarizing the commission's decision -- provided new details about last year's shooting of White, which occurred in the Mid-Wilshire area.

Both officers' names were redacted from the reports. The LAPD previously identified Shuff as the officer who opened fire.

The events leading up to the shooting unfolded the morning of July 9, when the officers responded to a report of a man smashing windows with a skateboard near Wilshire Boulevard and La Brea Avenue.

When the officers arrived, they spotted White, who matched the description of the person breaking windows, according to the reports.

The rookie officer yelled at White to get on the ground, the reports said, but he ignored the commands and got on his skateboard.

The officers radioed for backup and drove down Sycamore Avenue in their patrol car, trailing White as he rode away, according to Beck's report.

The officers struggled to handcuff him, prompting the rookie officer to draw her Taser. She pressed the stun gun against White at least twice, the reports said, but the struggle continued.

The officer set the Taser on a nearby step. She later told investigators she believed the device was out of White's reach but close enough for her to grab if she needed it again. Instead, White snatched the Taser and pressed it against the officer's leg, the reports said.

As she screamed, Shuff drew his gun and fired.White collapsed on the steps, the Taser still in his hand.

White was one of 36 people shot by on-duty LAPD officers last year.

Twenty-one were killed. Both Beck and the police commissioners faulted the officers' tactics, specifically the rookie cop's failure to secure her Taser and Shuff's decision to tell his partner to go for the skateboard instead of waiting for help from other officers.

Shuff, who has worked for the LAPD since 2007, has returned to field duties, a department spokesman said last week.

It is now up to Beck to decide what discipline, if any, to hand down to the officer. Under state law that gives police officers sweeping privacy rights, that decision will not be made public.

A taeser?? Lol police these days need to man up like they did when I was growing up in the LA housing projects in the 80s and 90s