LAPD station brings victims' loved ones together in holiday tradition 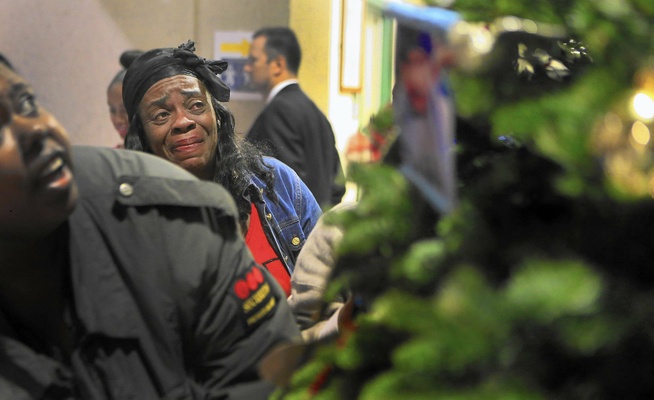 Jocella Hurd Collins' holiday routine changed forever in 2001, the year her 26-year-old son was killed one week before Christmas.

Each year to remember her son, Cedric Hurd, she creates an ornament decorated with his name and face. Usually, it's shaped as a heart.

Then she takes the ornament to the LAPD's 77th Street Community police station and places it on a tree in the lobby.

The tree-trimming event is unique. No other L.A. station holds a similar ceremony. But in a district where detectives handle about 40% of the city's homicides each year, it has become a somber tradition since it began, the same year Cedric Hurd was shot to death.

Wednesday night, after the ornaments were placed on the tree, those gathered walked into a bare room normally reserved for news conferences. There were cookies and coffee. People shared memories of the dead and talked about their enduring pain. 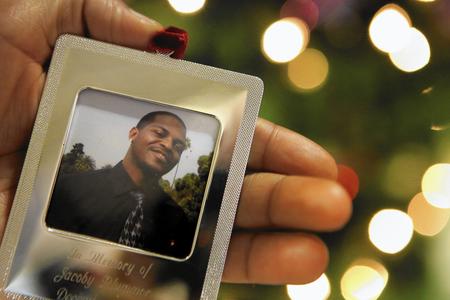 The more seasoned detectives say they've learned to stand near the door, so when their eyes well with tears, they can step outside. For the new detectives, the event is a reminder of the importance of their work.

Elaine Brown, whose son, Fenton Brown Jr., was killed two days after his 19th birthday, said when she first came to the police station, she didn't have any hope. Two days after the killing, she said, the suspects were in custody. When she took the podium, she told her story in an effort to offer others hope.

Other speakers talked about getting involved in the community. A grandmother described how when her grandson was shot in broad daylight, someone went through his pockets and took his cellphone and belt. A mother told the crowd: "Please don't let what happened define you."

In the lobby, two men stared at a simple ornament of an iridescent star that hung on the tree in honor of their brother, Eddy Lewis Jr., 28, who was shot in October.

Annie McGee, who also came for the first time this year, placed an ornament on the tree of her son, Sidney McGee, a 48-year-old who was killed outside a liquor store in Florence in May. He was shot four times in the chest, she said.

"It just happened," she said.

"I know each and every one of you has suffered," she said.

"That never goes away."

Photos: (Top) Vannetta Gray, right, fights back tears as she looks at a Christmas ornament hung in remembrance of her son Jacoby Plummer, during the annual tree-trimming gathering at the LAPD's 77th Street Community station. (Bottom) Michelle Watson holds an ornament with a photo of her brother Jacoby Plummer, a homicide victim. Credits: Brian van der Brug / Los Angeles Times

I don't have a degree nor work with teens, but I have dealt with gang members. I was too a troubled teen and gave my parents headaches. I'm a grown woman now, with a teenager and I know the struggles when dealing with a troubled teen. But what I can tell you is that these gang members come from homes (not all) that don't have a father in the home. Many of the single mothers are working or have too many kids to care for that one troubled kid. So what he or she does is go find a place of belonging, which are gangs. Gangs make you feel like you are important (at the time), a family, and even a negative bonding. You need to love what you do. Dealing with a trouble teen takes time and a lot of patience. They want someone that understands them and feel wanted. If this is a struggle for you then its not for you!!!! All these teens are looking for is a sense of belonging whether is a negative or positive outcome. Listen and be patience. Figure out what he likes and most of all listen to him!! Good luck!!!

When snowflakes dance on winter winds
And colored lights shine Christmas cheer,
When children's laughter fills the air
And families gather from far and near,

I try to celebrate with them
And not let my hurting show,
But the empty spaces within my heart,
At this season, seem to grow

'Till often times it fill the days
And many night times too,
With aching thoughts and memories
Of Christmases I spent with you.

So for now I'll wipe away the tears
And join with loved ones dear
To celebrate this Christmas time,
For I know that, in my heart,
you're here.

Thanks Marie,
Unfortunately this will always be a job. We all come into it thinking I will be the one that makes a difference and we leave 2 years later burned out and thankful for the education that gives us options. Of the 10 people I kept in touch with who graduated with me…none are left doing this type of work. I am on the down side of my burn out. I guess I was just looking for something that would help me reach this kid. Oh and Homeboy industries did not work for me…too much going on there that I question and there were no answers. I guess it worked for you though…

Yani, I really think you shouldn't be working there it seems like you have no experience in doing what you are suppose to be doing People who do this kind of work like to do it and not only gang members end up on this site. But if you want to hear from exgang members that have made a change in their lives try going or calling HOMEBOY IND. in Los Angeles Father G runs Homeboys and has works with gang members for many yrs.
Good Luck ! Keep in mind that helping kids change shouldn't be a job ... You have to care

Dear gang member:
I just started working with a group of kids who will end up on this site one day. I have two 13 year olds that are so far into this life style that I cannot reach them. Granted I have only been at this job for a little over a year but I am at my wits end as to what to do to motivate a 13 year old to get out of that life style. Now one 13 year old is too far in it. Even if I got him to leave today he would end up dead so I am not trying to get in him out of the gang anymore. His parents/grand-parents are not responsive to my help. There has to be some gang member out there who can tell me what the interest is in this life style? I am so not used to this. Every Monday when I get to work I wait until the afternoon just to see if my 13 year old shows up. There has to be some older gang member reading this who can tell me what I can tell this kid to offer him some hope. Or just to help me understand why? I look into this big brown eyes every Monday afternoon as he sits across from me drinking the soda and eating the chips I brought in and I just don't get it. All I am asking for is for someone to help me understand so when this 13 year old leaves this world I can look back on this blog and remember what you said to me.

This was amazing to read. A really heartfelt gesture from LAPD...really touching. My prayers are with all the families but specifically with Celestine Lewis the mother of Eddy Lewis, we love you all.

I agree Brenda, these officers risk too much for so little pay, now I understand why the Rampart CRASH unit did what they did to clean up the Pico Union WestLake area, those cops although corrupted, put the fear of GOD into those gangs in the area ( MS13, RockWood, 18 Street ) and because of those RamPart cops and the current Chief of police plus better police communication with the community crime has gone down, the gangs still operate in the area, but their weak compared to how strong and violent they were in the 80's and 90's. The police have done a great job and I believe other troubled areas can improve

Brenda
Let's hope you're not an officer with such atrocious grammar and spelling.

I remember living in that area for a while,
i also remember going to a ride along in that station in order to prepare me more for the lapd proccess. All that i can said is since i live n was race in the worst gang area of Los Angeles,
18st gang against rockwood gang drive by shootings 5 times a week. I got used to the violence.
now that i moved out n drive by there theres no more violence, at least not like 30 years ago, the lapd has done in amazing job in cleaning that area, but theres still way more areas left n is not an easy task. After seing from a patrol car, n living in that area for years, i have nothing but respect for the lapd cops, because the money they get paid is sooooo litle for the risk that they go thru, n their hearts get broken often n they get fill of anger n rage specially when they see a child abuse situation, i knkw before that was the biggest problem.