LAPD's homicide library puts files a click away for detectives 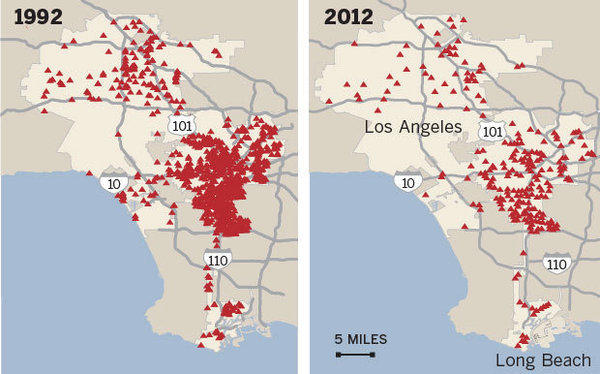 The article looks at how the LAPD has assembled a digital library of homicide files – solved and unsolved – with the goal of putting a database of long dormant cases within a click away for police detectives.

So far, the database includes cases from the southern part of the city – long the deadliest – between 1990 and 2010.

For LAPD Det. Teddy Hammond, creating the database has meant reliving some of the most violent years in the city. He’s paged through crime scene photographs, medical reports and handwritten notes to prepare the files to be scanned.

Hammond, who prides himself on his detective skills, read through cases only to come away angry and frustrated by what he saw as shoddy police work. Some families never even received a phone call.

As he delved deeper into the files, he realized that investigators had been strained by the violence. There simply weren't enough of them.

"They were swamped," Hammond said.

One day, Hammond was sorting through files when he saw a name he recognized.

He paused. Wait a minute, he thought. I know this name.

Hammond read through the file.

I have someone in here too, he thought.

Now, he says, the library is about moving forward and making amends.

Read more here. Questions? You can read a transcript of an online chat about the story, or email Nicole at nicole.santacruz@latimes.com.

And where can I find this at?

Thank you for your great work Nicole . The Homicide Report is the most important part of the L.A. Times, this report shows us the bad areas. I moved from Germany to L.A. and I found a good home in West L.A...

I don't have to fear for my life when I go out. Thank you for that. And (!) you give the victims a name and a story, they will be remembered, they will be a warning to all of us.

7.62: Depends on what you mean by solved. A case being "cleared" by a police agency does not mean that the killer was convicted or even caught. In the past, some police agencies even considered a case to be cleared if the officers believed they knew who did it. Being able to assess what percentage of cases are actually solved is more complicated than it should be. We hope to be able to get deeper into this issue on the Homicide Report in the coming year.

--LA Times, how many murder cases have been solved since 2007?