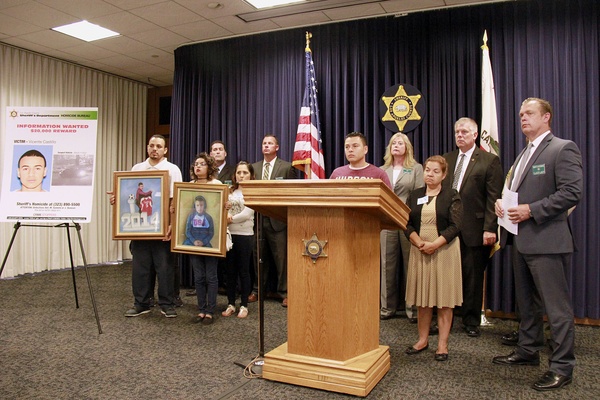 Authorities are hoping a larger reward of $20,000 will help find the man who fatally shot a 19-year-old Long Beach City College student two days before Christmas in what appears to have been a deadly case of mistaken identity.

Vicente Castillo, a 2014 graduate of Compton’s Centennial High School, was killed early in the morning of Dec. 23, 2014, as he was driving home from a late-night workout at the gym, Los Angeles County Sheriff’s Department Lt. Steve Jauch said at a news conference Wednesday.

“He was an excellent student, an excellent friend and an excellent son,” his mother, Maria Ponce, said in Spanish after Jauch spoke. Other family members stood near her, holding large photos of the young man who dreamed of someday playing professional soccer.

“We’re asking for help,” Castillo’s older brother, Wilmer Medina, said from the podium. “Please, if you know something, don’t be afraid. The right thing to do is to bring this person to justice. My brother was a good person. He had no bad habits. He had goals and dreams, but because of one person, he didn’t have a chance to make them happen. He didn’t deserve to end up like this.”

The incident started about 1 a.m., as Castillo was driving home from the gym in his white Nissan Altima, with one of his workout friends in the passenger seat.

Castillo often went to the gym late at night, when it was less crowded, Jauch said.

As he was driving at the corner of Atlantic Avenue and East Alondra Boulevard in Compton, he saw a black sedan he thought was driven by a friend, Jauch said. He followed the car for about five blocks, to the intersection of South White Avenue and East Rose Street, thinking he was going to talk to the friend.

The shooter then got back in his car, which had at least one other passenger, and drove away, Jauch said. 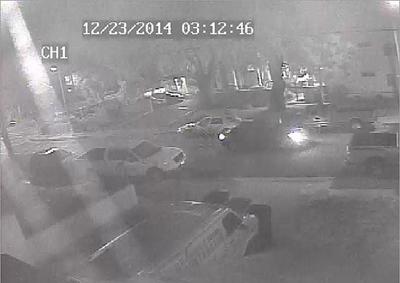 Castillo was able to drive a short distance while his companion called 911. Paramedics took him to a nearby hospital where he was pronounced dead at 2:27 a.m.

Jauch said they are withholding the name of Castillo’s companion, who fears retaliation. Det. John Duncan described the shooter as Latino in his mid-20s, with a chubby face. The only description of his vehicle was a black four-door sedan.

This is the second time the Los Angeles Board of Supervisors has approved a reward to try to find Castillo’s killer. In March, the board approved a reward of $10,000. The amount was increased to $20,000 for information that leads to the arrest and conviction of the killer.

After the first reward was announced, Duncan said he and his partner, Det. Mike Valento, walked the mostly residential area where the shooting occurred, posting fliers and handing them out to residents, but no information has come in. Investigators have also passed out a blurry photo of the attacker’s sedan, taken from a business security camera.

Jauch emphasized that the shooting was unprovoked. Investigators don’t think Castillo did anything other than follow a car he thought was driven by a friend and apologized when he realized he was wrong. “It’s senseless," Jauch said. "We have to rely on the community to help us solve a crime like this.” 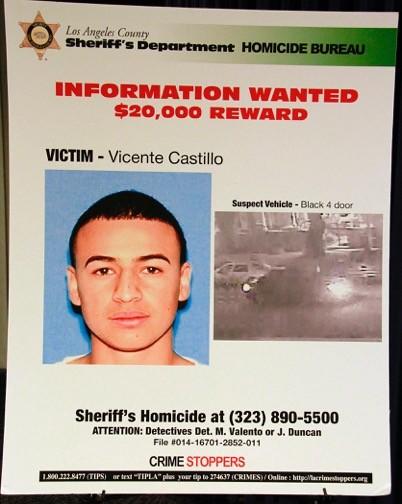 Castillo was the kicker on the Centennial High School Apaches football team during his senior year, and played league soccer with Compton United. He also worked part time with his brother and uncle.

His burning goal, however, was to play professional soccer, and he’d gone to a tryout for the Los Angeles Galaxy soccer team. They indicated he had promise, Medina said, and his brother was hopeful that someday he could join the Galaxy’s developmental team.

“They told him to keep his grades up, play hard and stay in school,” Medina said. “He was a very loving person, a good, healthy person, who was never in any trouble. That’s why it’s important for us as a family to find the man who did this, so we can give some peace to my brother.”

“I couldn’t believe my son could be gone in the blink of an eye,” Castillo’s mother added, as her daughter, Maria Castillo, translated. “We want the community to help us achieve justice. We’re asking for him [the killer] to turn himself in so God can forgive him for what he has done.”

Anyone with information is asked to call the Los Angeles County Sheriff's Department's Homicide Bureau at (323) 890-5500 and ask for Dets. John Duncan or Mike Valento. Those wishing to remain anonymous can call Crime Stoppers at (800) 222-8477.

Photos: (Top) Wilmer Medina, center, with his mother, Maria Ponce, at his left, asks the community for help in identifying his brother's killer during a news conference in Monterey Park on Wednesday. Credit: Jeanette Marantos / For The Times (Middle) A security camera at a nearby business captured an image of the suspect's black four-door sedan near the corner of Alondra Boulevard and White Avenue. The surveillance camera's clock was out of sync, said Det. John Duncan, so the time stamp on the photo is  a couple of hours fast. (Bottom) Reward poster. Credit: Los Angeles County Sheriff's Department

Ive known chente since 6th grade i talked to him 4 years ago and now i regret not staying in touch but he doesnt deserve this hes young and had his whole future ahead of him he never did anything ro anyone he was a good guy he qould never harm anyone i hope they find this horrible person who did this and gows to jail forever he didnt deserve this R.I.P CHENTE QUE DIOS TE TENGA EN LA GLORIA one day we'll meet again

Uhhh… sad to say but following someone for several blocks at 2am in Compton, CA is pretty much provoking. Let this be a lesson that nothing good or safe is going on in Compton especially between 12-3am.

I take that as an honor. Although I think it is 7 years.

But it is a fact of life in those killing fields that nothing good ever happens after dark.