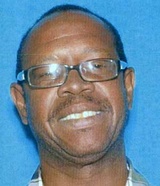 Larise L. Smith, a 56-year-old black man, was shot and killed Monday, Dec. 8, in the 2800 block of West 42nd Street in Leimert Park, according to Los Angeles County coroner’s records.

Smith was walking his dog in the area shortly after 6:30 p.m., said LAPD Det. Sal LaBarbera. He stopped at the corner of West 42nd Street and 7th Avenue to talk to neighbors when a person approached and asked him where he was from, LaBarbera said. Smith was not affiliated with a gang.

The gunman fired several shots. Smith was taken to a hospital where he was pronounced dead at 8:22 p.m., according to coroner’s records.

Share a memory or thought about Larise L. Smith

Man, if that wasn't a hit? whatever happened?

Now that his picture is up, this poor man doesn't look anything like a gang member or an ex-gang member. Why would someone hit him up as to what gang he was from? Stupid gangsters.

What a shame, how can we talk about the police killing us, when we are doing it to our own race....May god bring comfort to this family.

He was a good man with a good heart. Much love to his family and love one's. My God Bless you. Sorry for your lost.

Why would someone ask a 56 year old man what gang he was from, most guys that age are not active gang members, makes me sick to hear about murders like this.

Larise was a good, quiet guy who never bothered anyone and loved his dogs and his garden.