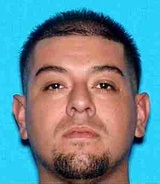 Larry Villegas, a 24-year-old Latino, was fatally shot Sunday, Aug. 28, in the 11800 block of Painter Avenue in South Whittier, according to Los Angeles County coroner's records.

Villegas and Cesar Rodriguez, a 19-year-old Latino, were gunned down in front of a home early Sunday as they were leaving a party, officials said.

A gray Scion sedan drove up, the driver pulled out a handgun and fired several shots, according to Sheriff Deputy Bill Brauberger.

There were three or four suspects in the Scion, which was seen heading northbound on Painter.

Villegas and Rodriguez died at the scene, Brauberger said.

Do you have information to share about the life of Larry Villegas ? The Homicide Report needs your help. Please fill out this form or e-mail us at homicidereport@latimes.com.

I miss you , 5 years and I still wish you were here. I love you so much, your kids are so grown baby Larry is just like you continue to take care of them. PLEASE ANYONE WITH INFORMATION PLEASE COME FOWARD LETS FIND THE COWARDS WHO TOOK MY COUSINS LIFE!!

Its been one year it went by so quickly til this day i miss you wish you where still here so i could see you drive by or you throwin the peace sign or just hearing your laugh i cant stop crying til this they when they say your name i break down i know your in a better place but im still hoping it was just a dream or an ugly nightmare my heart is broken but ill be strong an keep your memory alive i love you.... May you rest in peace with the angels look down on all of us an keep your mom & dad strong always be in my heart

11 months :( feels like yesterday i heard the bad news i miss you soo much not a day goes by that i dont think of the crazy things we use to do i love you keep watching over all of us our guardian angel :)

I know we didnt speak at the time of your death but it hurt me so bad cause you are more than a friend your like family i love you may you rest in peace an keep looking out for your family and your kids still so unreal :( wish you were here love you!!!!!!!

south whittier would always miss you all you were a good soccer player and a good friend of my brother and father who teach soccer will miss larry cesar from ....niteowl ssw

I miss you brother I love you rest in peace

3 months without you primo :(

SO sad ! can't believe Larry is gone he really was the sweetest kindest guy ever, his poor baby is so beautiful he loved that kid..South Whittier really isn't the same nemore..watch over may him and Ceasar rest in peace god bless </3 my heart goes out to their family

RIP cuddy miss you bro never going to be the same......

When will the senseless killings stop?

An angel in a robe of white
came to me as I slept last night.
She smiled and whispered in my ear,
“It’s time for you to come, my dear.”

“Though time was short since you were born,
you’ve earned the crown without the thorns.
God knows the sweetness of your soul.
Your spirit and heart are pure and whole”

I asked if I could say goodbye,
to Mom and Dad who were nearby.
The angel smiled, and said with a nod,
“I’m sure that will be ok with God.”

Did you feel my kiss goodbye,
and the tears that fell from my eyes?
Have trust in God, though I must go.
Just like me, He loves you so.

He will comfort, and hold your hand,
and help you so you’ll understand.
And when your heavenly call comes too,
with outstretched arms I’ll come to you.

R.I.P Larry & Cesar... You both will be missed... Can't believe your both gone... Always remembered never forgotten... WE WILL ALWAYS LOVE YOU BOTH AND MISS YOU SO VERY MUCH... SOUTH WHITTIER WILL NEVER BE THE SAME AFTER THIS TRAGEDY... XOXOXOX TO FAMILIA RODRIGUEZ & VILLEGAS.. FROM SIGALA FAMILIA

we miss you larry

cant believe your gone
poor larry , you will be missed !

the community lost one of the kindest people around.he was a super outgoing sweet guy.

he was a wonderful father to his son and he would have been an excellent father to his CHILD ON THE WAY.but that poor baby will never get to meet its father which is the saddest thing in the world

you will always be remember by your family ,friends ,and neighbors and everyone who knew and loved you