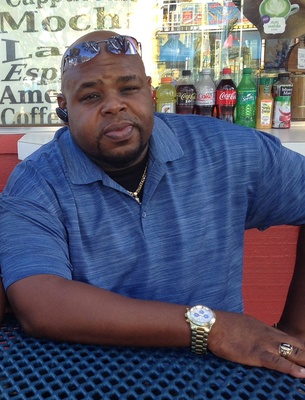 Virgil, an operations supervisor at Los Angeles International Airport, was at a friend's house about 5:44 p.m. watching his son do basketball drills. That's when a car pulled up, Los Angeles County Sheriff’s Lt. John Corina said, and a black man in his 20s wearing a gray hooded sweatshirt got out of the passenger seat and began shooting. Children and adults went running, and the gunman got back in the car, which was driven away.

Lester Virgil, who was sitting on the porch, was struck multiple times in the upper torso, and was pronounced dead at the scene at 5:50 p.m., according to coroner’s records. No one else was injured.

His wife, Trekesha “Kesha” Virgil, arrived at the home moments later to pick up her son.

Lester Virgil was supposed to drop off their son that afternoon so the 12-year-old could practice for a tournament the next day. But Lester Virgil got to talking with the other father, Kesha Virgil said, and never left. When she got off work, he told her to come by.

“The wife called me about 15 minutes later and said, ‘You’ve got to get here right away. Something bad’s happened. He’s been shot,’” Kesha Virgil said.

“I slammed on the gas and thought, ‘Oh my God.’ I was in a rage, you know? And by the time I get there, the ambulance is leaving, and no one’s inside. And I can remember my son’s face as he was running toward me, saying, ‘Mom, they shot my dad, they shot my dad.’”

Life has been a blur since, Kesha Virgil said, but she's found some comfort from friends and coworkers who have deluged the family with support, setting up fundraising accounts to help with expenses and her son’s future education.

“When you read the comments on his Gofundme account, you get a glimpse of the kind of man he was,” said Richard Chong, chief of airport operations at LAX. “This is a huge loss to LAX and his family.”

Virgil’s main job was to work closely with contractors doing construction in and around the airport to ensure they could do their work without blocking traffic, Chong said.

His stocky build and booming voice gave him a commanding presence, Chong said, “but at the same time, he was very cordial and respectful. Even though he sometimes had to deliver bad news, he did it in a way that made sense to the contractors. He had a knack for building bridges. That’s why people gravitated to him, because they felt a bond with him.”

Virgil graduated from Lynwood High School. He was a talented artist, Kesha Virgil said, and hoped to get an art degree, but when he became a father at 18, he went to work.

She met him in 1999, when they were working for an air freight company at LAX. His two daughters, now in their 20s, were little girls then, she said, and one of the reasons she fell in love.

“He could always say something to make me laugh, but then I saw that he cooked and he cleaned, and he just had this overall presence with his daughters,” she said. “It was really attractive. I thought, ‘Wow. This is a family man.’”

The couple were supposed to celebrate their wedding anniversary on Aug. 20 with a cruise to Mexico. Instead, Kesha Virgil spent the day preparing for her husband’s funeral, which will be held Friday in Inglewood.

“It’s just so unreal,” she said. “It took me until that Saturday, when the funeral home came to get his clothing, to actually realize this was not a dream.”

Share a memory or thought about Lester Scott Virgil

Ohh cousin, I never knew what a broken heart consisted of until this happened to you💔💔💔💔 I love u soooo much u were my king👑 I miss u I'm still feeling like this can't be true! but I know it is😞

First of my prayers out to Lester family. This is getting unbearable. These cat's out in the streets tearing us down as a people. Put your flags down stand up and be productive black men. And provide and protect your family. And stop taking others people love one's. I'm worried about his son who had to witness this tragedy. Real black men stand up. We need to put a stop to this genocide

This was such a tragedy to be gunned down like a thug in the streets. Lester was far from being thug... My little cousin was a hard working family man who loved the Lord, his wife and family. Please everyone, stay on top of the Inglewood Police Department that they find his killers and bring them to justice!!!!!!!

It's been almost a month since we lost you. Yet, your desk remains the same as you left it. It just doesn't seem right to clear the photos of your family and personal mementos around your work area. We know we'll have to and we'll eventually have to fill your role to continue to do the important work you used to do. But you won't be forgotten. People still asks about you in present tense as if you never left. It's too soon for your colleagues to know that we lost you. Your service on Friday was a reminder that we did. It was somber but surprisingly festive. There were more laughters and cheers, and even some dancing in the pews. We celebrated your life. The church was packed - standing room only and the service lasted nearly 3 hours but we all jenjoyed just being there among your family and loved ones. Your LAWA brothers and sister were there in large numbers - from those you've trained to executives and even those who retired. We all came to send you off. Today, we retired your radio call sign. The final radio call to OPS 43 was another way for us to say goodbye. I hope you heard it. Farewell brother.

My heart and soul is devastated by the loss of my big brother my best friend on yesterday, his life was taken too soon! Lester I Love you for keeping me focused and keeping my head on straight through my ups and downs and trials and tribulations I will forever remember everything that you told me from the time we had together. I'm going to miss talking to you everyday as we have over the last 16 years straight. I think God for bringing us together! Love you for Life! I will make sure all is well with Ki & Little Scottie! Until my time comes I'll see you soon! R.I.P. Big Bro!!!!!

Lester "Scottie" Virgil, is the Best God Brother anyone could have asked for and will truly be missed for many years to come. He will always be loved in our family.

Yesterday was one of the most moving life celebrations I have ever attended. A testimate to the type of caring person and loving father Lester was. Such a senseless tragedy, such loving family and friends m. Your legacy lives on Scott.

From your friends and extended Qantas Australian family

Big Les as I called him was a friend to me from day one. We met at LAX we spent a lot of time together but he was genuine he was intelligent, gentle and just was a good man he was so intuitive you could tell from a simple conversation this guy is special....you will be missed