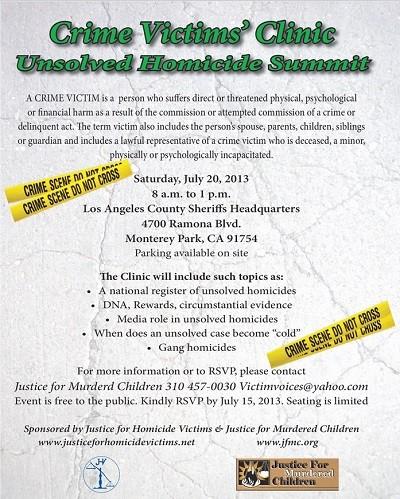 In nearly two decades, LaWanda Hawkins has seen families lose faith that the homicide case of their loved one will ever be solved. She’s seen others wonder when exactly does a case become cold? Other times, families wonder when witnesses will begin to speak up or how often they can call a homicide detective.

Hawkins, the president and founder of Justice for Murdered Children, began thinking of a way to connect families with law enforcement. The product is Saturday’s first-ever L.A. County unsolved homicide summit. The event will bring together dozens of representatives ranging from the district attorney’s office, LAPD, the Sheriff’s Department and other agencies across the Southland.

“The purpose is to create some form of communication from law enforcement and the families of the victims,” Hawkins said.

Hawkins, whose only son, Reginald Reese, was gunned down in San Pedro in 1995, knows these issues well. Her son’s case remains unsolved.

“These are good people, but we have to connect again,” she said of law enforcement.

She said the summit, which will be held at the L.A. County Sheriff’s Department headquarters, will be step one to finding solutions to these issues, which will be addressed in various panels. Other issues such as DNA, rewards and gang homicides will also be addressed. Families will also have the chance to talk about their cases.

Those who are interested in attending the free event can RSVP at (310) 457 -0030 or e-mail victimvoices@yahoo.com.

[For the record: A previous version of this post said Hawkins' son was killed in 1996.]