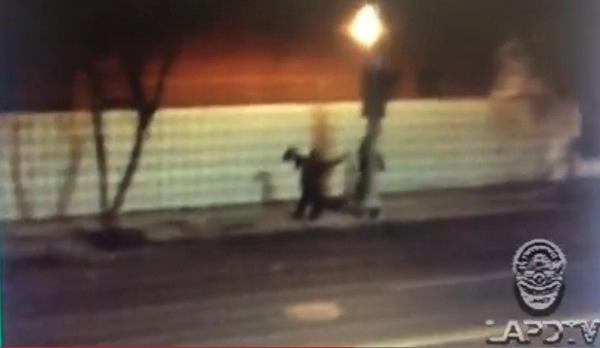 A man suspected of fatally stabbing a 35-year-old man turned himself in for the Dec. 20 killing late last week, police said.

McGilvery is suspected of stabbing William Jennings, 35, in Jefferson Park. Jennings was on his way to the store when he got into an altercation with McGilvery, LaBarbera said. McGilvery, who lives in the area, pulled out a knife and stabbed Jennings multiple times. McGilvery then allegedly grabbed Jennings’ wallet and fled from the scene.

“We don’t know what the motive was, it was some sort of dispute,” LaBarbera said.

Jennings leaves behind a wife and 11-year-old daughter, according to a news release from LAPD.

After police released surveillance video of the stabbing people who knew McGilvery urged him to turn himself in.

McGilvery has been charged with one count of murder and one count of second-degree robbery, according to a felony complaint filed by Los Angeles County prosecutors. He is scheduled to be arraigned Tuesday.

@Jay they were both black. Look at the original video on YouTube of the murder. But that does not excuse the person who murdered him. Over what you asked for his wallet and he tried to talk him out of taking it so you stab him and take it anyway, that's what it looks like to me and the DA. Thats why he is going down for murder and second degree robbery.

at least, he took some responsibility for his own action.

Well he isn't a coward if he turned himself in, is he? What kind of reverse logic is that. On a side note, finally a crime that wasn't done by a Black or Latino.

Whats so hard about walking away from an argument that escalated to murder, there's no honor in dying over a stupid disagreement, but people want to prove how tough they are and end up dead. It looks like the victim had plenty of opportunity to walk away he wasn't boxed in or cornered. Self control doesn't make someone a punk especially if your married or have kids, the same goes for the coward who pulled a knife, these two were acting like middle school, high school kids both are grown men who should have more common sense.

I am glad that coward decided to turn himself in.