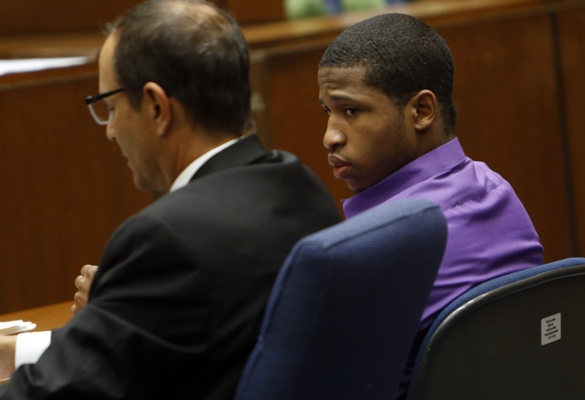 A jury convicted a 22-year-old man of first-degree murder Monday in the shooting deaths of two graduate students near USC two years ago, in a case that rocked the campus and became international news.

Javier Bolden stroked his chin and laughed quietly after the verdict was announced. His mother gasped, dropped her forehead into her palms and began to sob as a clerk read that Bolden had also been found guilty of attempted murder and assault with a firearm in a separate shooting involving two victims outside a banquet hall in South L.A. a couple of months earlier.

The April 11, 2012, shooting of Ming Qu and Ying Wu was one of several violent incidents that prompted the university to increase security on its campus and in the surrounding neighborhood. The victims were 23-year-old engineering students from China, and their deaths raised fears in China about the safety of students at the school. USC has the largest foreign student population of any U.S. university; about 3,000 of its 8,000 international students are from China.

The verdict came after a six-day trial in a downtown L.A. courtroom, during which a prosecutor played a video of detectives interrogating Bolden after his arrest. At first, Bolden was evasive.

When a detective asked him if he remembered being involved in any shootings, Bolden responded flatly: “No.” Eventually, the detectives walked out of the room for a few minutes and Bolden hung his head and whispered that he was cold.

When they returned — an hour into the interrogation — one of the detectives told Bolden they were talking about something that happened near USC and urged him to speak up. The detective said that it could be a death penalty case, and that a lack of remorse could make Bolden look heartless.

“Do you want the jury to see something like that?” he asked.“Jury, jury, jury,” Bolden muttered back.

Before long, he changed course, admitting that he was near USC the night of the shooting. He then drew a diagram of where the victims’ BMW had been parked when he and a friend approached the vehicle, hoping to “get some cash.”

Bolden’s attorney, Andrew Goldman, told the jury of seven women and five men that his client hadn’t really been at the crime scene that night, but that he felt pressured into making a false confession after the detective brought up the death penalty.

Deputy Dist. Atty. Dan Akemon argued that some of the most damning evidence in the case was a wiretapped phone conversation in which co-defendant Bryan Barnes asked Bolden if he remembered the time they “ran up on them little Asian people.”

Bolden responded “mmnh-mmnh” when Barnes mentioned details from the shooting, and toward the end of the conversation, Bolden told Barnes to “just relax.”

Jurors also watched a video of Bolden bragging about the shootings to his cellmate, a police informant, in jail. Seated on a bunk bed, Bolden told his cellmate that he watched as Barnes shot the two students.

“The passenger just slumped,” he said.

Goldman told jurors that his client had made up almost everything he said in order to look tough in front of his older cellmate, who was described by a detective as a heavy-set man with gang tattoos who gets paid between $500 and $1,000 every time he works as an informant.

During closing statements, Akemon questioned that argument, saying he didn’t think Bolden’s demeanor in the video suggested that he was intimidated by the informant.

“This is a very street-smart young man,” the prosecutor said.

Several times during the trial, Bolden turned to look at his family in the audience. Sometimes he smiled. Other times he put his hand up near his ear, signaling that he wanted to talk to them on the phone. Most days, his mother sat quietly with a Bible on her lap.

After the verdicts were read, Akemon left the courtroom without speaking to reporters. Goldman declined to comment on the verdicts in the USC slayings, but said he thinks jurors may have found his client not guilty in the South L.A. shooting if the two incidents hadn’t been lumped together.

“I think it prejudices the evidence,” he said, adding that he plans to file an appeal.

Bolden faces a possible life-without-parole term and is scheduled to be sentenced Nov. 17

I must say this ...the mother of the defendant in court crying...seems like those tears should be more for the victims but okay at least yours can still be visited in one of the many prison systems he killed to go to...Rip Ying and Ming