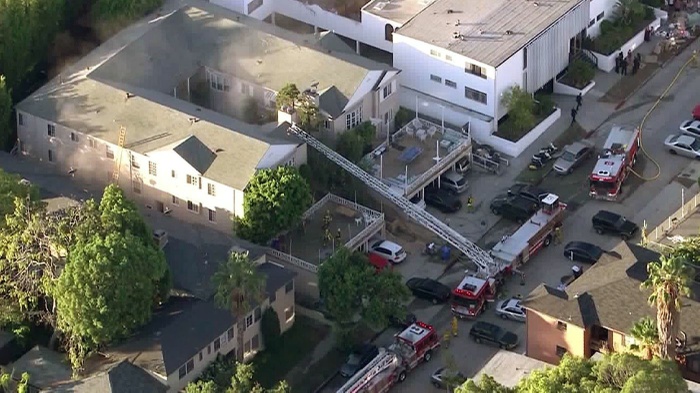 A jury on May 29 convicted a man in the 2015 slaying of a UCLA student found dead inside her burning apartment — a gruesome stabbing case that led to a fierce rebuke of the police response amid concerns that the killing could have been prevented.

The panel deliberated for about six hours before finding Alberto Medina, 24, guilty of murder, arson, burglary and animal cruelty.

On Sept. 21, 2015, firefighters found the charred body of Andrea DelVesco inside her apartment after responding to the complex a block from campus.

The 21-year-old student — an Austin, Texas, native known to her sorority sisters as a "fearless giver" who befriended others with ease — was stabbed at least 19 times, authorities said.

Los Angeles police examined whether the killing was linked to the victim's recent prosecution on charges of possessing a cocktail of party drugs, but also revealed that they had a person of interest — someone who had been spotted running from the fire.

Prosecutors say that Medina, who was a student at Fresno State University, burglarized another unit in the Westwood complex before breaking into DelVesco's apartment, stabbing her and setting her home ablaze to destroy any evidence. (DelVesco's dog was injured and later euthanized, the Daily Bruin reported.)

During the trial, Deputy Public Defender Debra Werbel conceded to jurors that Medina had killed DelVesco but stressed that the slaying had not been premeditated.

Reached after the verdict, Werbel described the case as a horrible tragedy for the DelVesco family as well as her client's family, who took pride in Medina — the first in his family to attend college.

"Two families are suffering for very different reasons," Werbel said, adding that her client has repeatedly told her that he is "very sorry."

Throughout the legal proceedings, her client expressed concern with how the DelVesco family was doing and about his own parents, but never, the attorney said, worried about himself.

Marquez, a UCLA student, was charged with one count of murder, two counts of burglary and a count of being an accessory after the fact. He pleaded guilty to one burglary count and the accessory count.

Not long after the slaying, criticism had turned inward at the LAPD.

A month after DelVesco's death, the department revealed that it had launched an internal investigation into the actions of several officers who responded to a report of a woman screaming at the Westwood apartment complex shortly before the fire engulfed DelVesco's apartment.

Four officers conducted an investigation but left before the fire was reported, police said at the time.

In 2015, DelVesco's aunt, Melanie Peskett, told The Times that she couldn't help but wonder whether the officers could have saved her niece's life if they'd checked her apartment before the fire.

"It is a tragedy because you don't know if she was alive or not when officers came there," Peskett said, adding that she hoped the LAPD would implement policy changes to ensure officers do a more thorough job of responding to such calls.

The Police Department did not respond to a request for comment on the status of two of the responding officers who — according to a 2016 CNN report — were terminated.

Medina, whose sentencing is scheduled for July 20, faces life in prison without the possibility of parole.