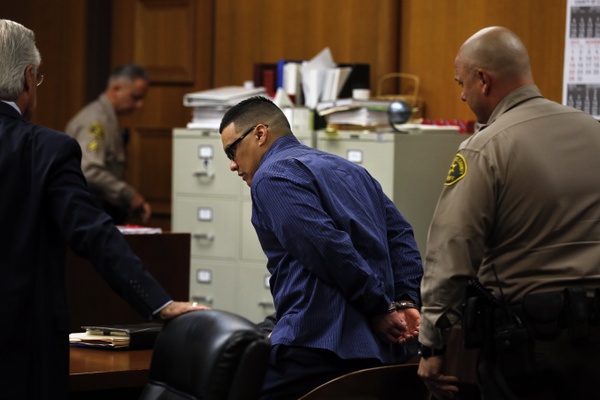 A Montebello man who killed his ex-girlfriend, her brother and father during a shooting rampage at the family's home in Hawaiian Gardens more than five years ago was sentenced to death Friday.

The same jury determined a week later that he should be sentenced to death.

Mercado was also convicted of three counts of attempted murder, one count each of first-degree burglary, shooting at an inhabited dwelling, arson and child abuse.

Jurors also found applicable the special circumstances of multiple murders, lying in wait and arson during the commission of a murder. Those findings made Mercado eligible for the death penalty.

Mercado’s sentencing ends a case that has long haunted the Tarin family.

Relatives who survived the rampage sat through weeks of emotional and graphic testimony that included pictures of the victims and 911 recordings of their final moments.

The Mercado family expressed shock over the shootings. During testimony, family members described Mercado as a loving son and uncle. They said he didn't take his breakup with Serena Tarin well.

Mercado and Serena were also involved in a dispute over their 8-month-old baby. Deputy Dist. Atty. Robert Villa, who prosecuted the case, said Mercado appeared to have planned the attacks a month before, when he purchased an AK-47-type rifle and extra ammunition.

Villa said that on the night of the shootings, Mercado drove to the family’s home with a container of gasoline and meat for the dogs outside to keep them from barking.

He added that Mercado waited for deputies at the Lakewood Station to change shifts, parked his car and smoked a cigarette before carrying out his plan.

He said Mercado first poured gasoline around the house and tried to set it on fire before unleashing a barrage of bullets outside and inside the home, killing Tarin's father.

Mercado eventually broke into the back of the house and made his way upstairs to Serena Tarin's room, where she had locked herself in the bathroom with the baby.

Villa said Mercado shot 14 rounds at the wall above a baby crib and into the bathroom door before kicking it open and fatally shooting Tarin. The baby was not harmed.

Moments later, he encountered Tarin's brother and fatally shot him.

Photo: Joseph Mercado is brought into court for his murder trial at Los Angeles County Superior Court in Norwalk in November. He was sentenced to death  Friday. Credit: Rick Loomis, Los Angeles Times

— Kwia Chang Caine
Do you bother to read the comments thoroughly? Norwalquero didn't say there was anything wrong with dating a 23 year old. He said the suspect was 26 and the victim was 23 at the time of the killings. That is only a 3 year difference between them. That's all he was suggesting. You are like most people on here that don't bother reading a comment but are quick to jump and judge someone.

For Norwalquero and Eric Hood... What's wrong with dating a 23 year old?? Did I miss something?? and for Danish42, It would be awesome if the State put this animal down in 20 years.. Sadly, because all the idiots who are anti-death penalty, this punk will probably just die in prison of old age.

He was 26 at the time of the murders.

To bad this animal will be on death row for 20 years thanks to liberals that make up most of California politics.

Why was he dating a 23 year old