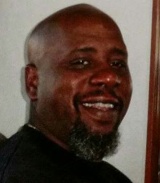 Marcus Edward McClendon, a 52-year-old black man, was shot and killed Tuesday, Aug. 18,  in the 1600 block of West 65th Place in Harvard Park, according to Los Angeles County coroner's records.

Shortly before midnight Aug. 17, McClendon and another man pulled up to a home to see a friend, said LAPD Det. Chris Barling. About 10 minutes after the two arrived, a man walked up and began shooting.

McClendon was pronounced dead at the scene at 12:01 a.m. Aug. 18. The other man, who was wounded, was taken to a hospital and is expected to survive.

Barling said the gunman ran north on South Harvard Boulevard and possibly got into a sedan. Police are looking for witnesses.

On Tuesday afternoon, Simone Glossen leaned back on the broken amp outside her home where McClendon sat before he was killed. Glossen, 30, looked toward the end of the street where a group of men circled the corner still in disbelief over the shooting. 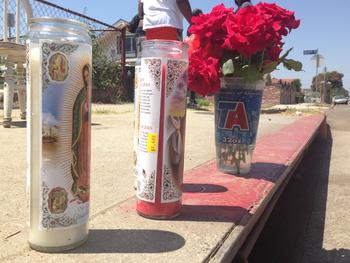 Glossen turned away and looked at three candles placed on the sidewalk where McClendon fell to the ground.

"I've cried so much already that I can't do it anymore," Glossen said. "I can't do much but just sit in it, you know. He's dead now."

Other people in the area said McClendon came to the area after getting off work. Glossen and others were chatting with McClendon late Tuesday night when a man walked up and opened fire, she said. The group scattered, she said, but McClendon was hit.

Friends and family remembered McClendon as a kind man who worked as a local mechanic.

This summer, he repaired the bikes of several kids on the block. Glossen said he also gave her rides in high school.

"He didn't have to do that you, you know," she said. "I wouldn't have thought any less of him. But he paid attention to the small things. And they made a difference to people."

Two days before the shooting, Glossen said McClendon helped her move some furniture into her home and play wrestled with her son.

"He said that he was going to come back and get him for round two," Glossen smiled. "He won't get that chance for a rematch."

Share a memory or thought about Marcus Edward McClendon

I'm gonna miss you Marcus. Love you Lotz. Who gonna dig my truck out the dirt a LAX now?

If we had CCTV in the area these creatures would be plastered all over the news, let's demand it.

My Buddy and good friend for 48 yrs. and little brother. He gave me the pet name Rockhead from our favorite animated cartoon Rocky & Boo winkle as little kids , because he would always come face to face with a challenge or tasks that he was not afraid to conquer, and even thought he knew there were villains lurking about he had no fear of them because he would befriend anybody... R.I.P my little brother

.Did she sit him up i wonder.Please this killing need to sto

I have known Marcus for over 35years.Marcus was a loyal friend and a real jack of all trades.Marcus is the coolest guy I have ever met.In his time with us no matter the job Marcus would do what ever it took to complete a job,needless to say he would say"give me what you can and pay me the rest later, Just DONT have me look for you to get my $$$.Marcus was loved by all and he will be truly mist.
MOVING CONTINUES!!! MUCH LOVE FROM $Kinny Ken