A Santeria spiritual leader who performed healing rituals at a Montebello business was named Tuesday as the suspect in the disappearance and killing of a woman six years ago.

Maria Delrefugio Chavez’s skeletal remains were found Aug. 7, buried behind a house in the 700 block of Elsberry Avenue in unincorporated Valinda in the San Gabriel Valley. The El Monte woman had been missing since 2009. (The L.A. County Sheriff's Department has placed a so-called security hold on the case, so authorities are withholding some information. Because of that, the Homicide Report is using the date Chavez's remains were found as her death date.)

Chavez got to know Mata when she patronized Los Angeles Import, a botanica he owned in the 2400 block of Whittier Boulevard, Sheriff’s Department Lt. Vic Lewandowski said.

Mata acted as Chavez’s spiritualist, and though he was already married and had a family, he fathered a daughter with Chavez, Lewandowski said. The daughter was 4 when Chavez was reported missing on May 7, 2009. 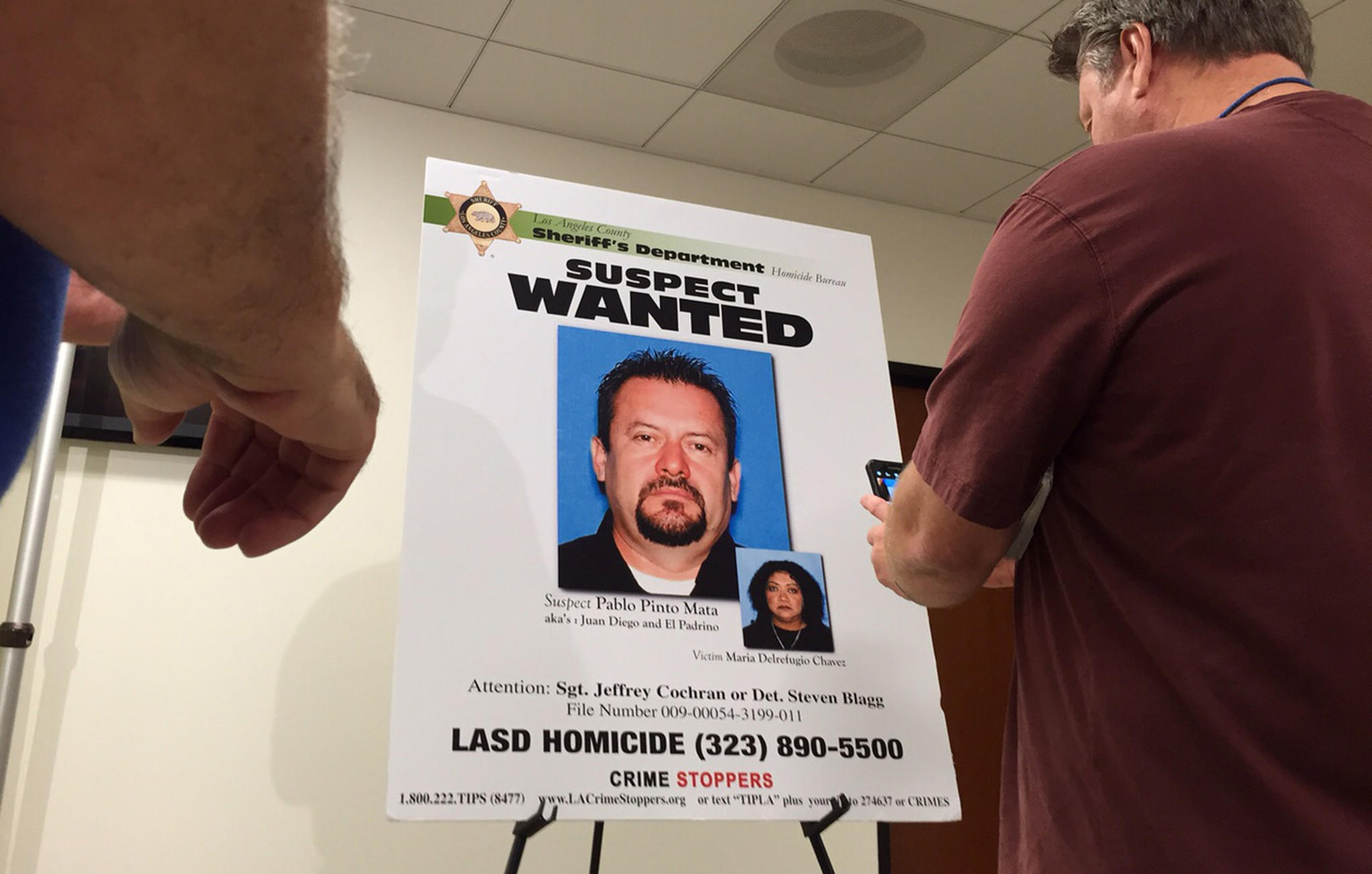 The girl is now living with other family members, Lewandoski said.

Detectives declined to provide details about how Chavez’s body was located, saying it was part of the investigation. The residents of the home are cooperating with authorities and are not considered suspects in Chavez’s death or her burial, Lewandowski said.

Earlier this month, Montebello police announced that Mata was suspected of sexually assaulting a 16-year-old girl during what he claimed were healing rituals in 2013. During her final visit to the store, Mata forced the girl to undress and assaulted her, telling the teenager that it was part of the healing ritual, the Montebello Police Department said.

Mata has eluded Montebello police since 2013, the department said. Authorities believe there might be others whom Mata sexually assaulted.

The last known address for Mata, whom detectives described as being of Salvadoran descent, was at the botanica.

At a news conference at the Hall of Justice in downtown Los Angeles on Tuesday morning, the victim's sister, Maria Elena Chavez, pleaded for the public's help in finding Mata.

"All I want is for the public to help us find the person who did this to my sister," she said. "She left a daughter who misses her all the time, just like my family does. My mother died a month ago with the pain of not finding her daughter."

Maria Elena Chavez said the family knew Mata and that he "seemed like a good person" but that they did not know he had a relationship with her sister or that he was the father of her daughter.

Maria Elena Chavez said she realized her sister was missing after she left her daughter with someone and never came to pick her up.

Mata – also known by the aliases Juan Diego and El Padrino (The Godfather) – was contacted by authorities in regard to the missing person case shortly after Chavez’s disappearance, Lewandowski said. At that point, it was not known whether she was dead or alive.

Photo:A photo of Pablo Pinto Mata, a suspect in the death of Maria Delrefugio Chavez, is displayed in a sheriff's news conference at the Hall of Justice in downtown Los Angeles. Credit: Bob Chamberlin / Los Angeles Times

Do you have information to share about the life of Maria Delrefugio Chavez ? The Homicide Report needs your help. Please fill out this form or e-mail us at homicidereport@latimes.com.

Share a memory or thought about Maria Delrefugio Chavez