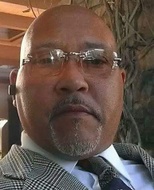 About 4:40 p.m., Tyree got into a dispute with another man outside the Louisiana Fried Chicken restaurant, said LAPD Det. Chris Barling. Another man interjected and shot Tyree once in the chest, Barling said.

Tyree was taken to a hospital, where he was pronounced dead at 5:16 p.m., according to coroner's records.

Detectives are trying to determine the cause of the argument. The gunman and the other man ran west on West Manchester Avenue, police said.

On Aug. 31 Black and Smith were each charged with one count of murder, according to the Los Angeles County district attorney's office. Prosecutors allege that Black was the shooter.

The two are scheduled to be arraigned Sept. 15.

Tyree's 15-year-old son, Mark LeRoy Tyree Jr., was shot and killed June 26, not far from where his father would eventually be gunned down. The two killings are not related, authorities said.

Imani Bakari-Tyree, Mark Tyree's wife and the mother of Mark Tyree Jr., said that morning, she found her husband crying in the living room with his son's death certificate on the coffee table.

In the wake of his son's killing, Mark Tyree wanted to look for solutions to the gang and gun violence in his community and eventually start a nonprofit organization.

"That's what kept him going through this tragedy," she said.

Share a memory or thought about Mark LeRoy Tyree

Mark, all the laughs and stories we shared while at Hollywood park will never be forgotten. one of the coolest dudes i had the pleasure of meeting during my years at the track.
miss ya bro R.I.P
j.d.b

Imani, you are in my prayers. I can only imagine what you are dealing with on a daily basis. I am praying that justice will prevail. May your husband and son continue to rest in eternal heavenly peace.

It truely hurts my heart to see a family be separated this way .from the beginning i prayed for justice and i continue to pray for the family for healing and peace

Mark Tyree is my uncle and I miss him dearly. The incident was senseless and he shouldnt have been taken like this. I pray justice will be served on ALL who had a part in this tragedy our family has been through. I am so hurt and the pain will never go away. I miss our talks, our laughs, and just his voice in general. He was always center of attention when he came around. He was always the first person I'd call when I needed to talk, he was always able to lift my spirits and make me laugh, and always had a solution. I just wish I had called him on what has become his last day, I had just seen him 10 days before he came to visit on my brother's birthday as he always did. I gave him a hug and kiss and told him I loved him and I know he knew it. It is still very hard to deal with and still I can't believe he is gone and my cousin TJ (Mark Jr). You are always in my heart always and forever, love you Uncle Mark. Breahna, Kyleigh, Camille, Lucci, and I (Kiki), your Keety Wheets, will always love you.

OMG what in the hell is going on in this crazy world. My homeboy just left with no goodbye. This is unbelievable. I'm still in shock. Lost for words. This family just buried Mark JR now Mark SR smh. God they need your strength more then ever. Lord both Mark JR & Mark SR are with you put your arms around them let them know they are safe they made it home but too soon. I love you. Never Can Say Goodbye. Your home girl LADY TEE 9TH ST

I met Mr. Mark L.Tyree about 15 years ago when I was sitting at a grocery store crying (literally)over my relationship with my husband. Even though he was a year younger than me, I listened to "A MAN'S" point of view. We lost touch, and just happened to meet up again through Facebook. I am glad I had the opportunity to thank him for stopping me make probably what would have been 1 of the biggest mistakes of my life.....my husband and I have been Happily Married now for 38 years.....thank you for sharing your loved 1 with me....the last time I saw him, he was trying to be strong for his wife regarding their son.....I am so heartbroken......rest well in heaven with your son...keep a close eye on your wife......God Bless this family.

My Brother Tyree a close friend and family member through mutual family relations with the Hodges family. A devoted father and husband who on June 26th 2016 just two months earlier lost the love of his life; his son to a senseless shooting. I want the city of LA to know that both son and dad were good decent souls who loved and were greatly loved by sister and aunt Danita Tyree...Our deepest condolences