Marlena was at home in the bedroom she shared with her brother and two sisters when she was shot around 5:30 p.m., said Los Angeles County Sheriff's Sgt. Richard Biddle.

Deputies were initially called to the home about someone being shot by a BB gun, Biddle said, "but almost simultaneously the hospital called to report that a juvenile was in the emergency room with a gunshot wound."

Investigators went to both locations and discovered the calls were related, he said. A family member drove Marlena to the hospital, but she was pronounced dead at 5:46 p.m., according to coroner's records. 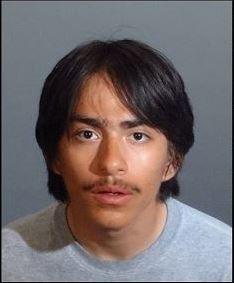 Her brother, Eddie Alvirez, 18, is suspected of firing the gun but investigators don't know why, Biddle said. At least one of her sisters was in the room when the shooting occurred, he said.

Eddie Alvirez fled the house on foot, with the gun, Biddle said, and a warrant was issued for his arrest. He turned himself in to deputies at the Lancaster sheriff's station around 2 p.m. the day after the shooting, according to a sheriff's news release.

Family members told NBC4 News that they believe the shooting was accidental. The siblings' mother was not home at the time of the shooting, Biddle said, but their grandmother was home, and both she and their aunt, Vanessa Zamora, made public pleas for Alvirez to turn himself in.

“We just hope Eddie doesn’t hurt anybody else or hurt himself,” Biddle told The Times. “We’re hopeful he will come and talk to us, or let us come and talk to him, or go to a sheriff’s station. His family has suffered enough tragedy.”

Family members told investigators they don't know where Alvirez got a handgun, Biddle said. Several family members live in the house, he said, "but we don't believe the gun belonged to the parents or anybody who lived in the house."

Photo: Eddie Alvirez, 18, turned himself in to authorities in Lancaster on Wednesday afternoon after he allegedly fired the shot that killed his 13-year-old sister Marlena the previous day.

Share a memory or thought about Marlena Virginia Alvirez

It’s sad to hear such accident happened. I wonder how the brother felt over that. Sadly, bad things happen, just like that. May she Rest In Peace.

My condolences goes out to this family

Hopefully it was just a mistake. We all make em, this one had some deadly consequences though. Not justifying what the brother did, but I remember in my early teens acquiring a gun, waving it around my friends and sister trying to be cool and show off. Back then I didn’t realize the magnitude of what I was doing. Then one day my gun was loaded and went off in my friends house. Luckily it was pointed towards the ground but it blew apart the tile in the den. I learned my lesson that day and didn’t pick up another gun until I was in the military. Anyways, may the family have solace during this time.