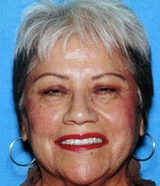 Shortly before 6 p.m., Matsumoto’s daughter called police because she was concerned for her mother’s safety, said LAPD Det. Greg Halka.  The daughter said her father-in-law had weapons in the house and that the couple had been having marital problems.

Police arrived and found Matsumoto shot to death in the bedroom. She was pronounced dead at 6:07 p.m. Police believe she had been dead for 24 to 36 hours.

Authorities then arrested George Matsumoto, a 75-year-old Asian man, on suspicion of murder. He was charged Feb. 10 with one count of murder with a weapon allegation and pleaded not guilty, according to the Los Angeles County district attorney’s office.

Do you have information to share about the life of Mary Matsumoto ? The Homicide Report needs your help. Please fill out this form or e-mail us at homicidereport@latimes.com.

Someone who knows George Matsumoto said his mother is Latina, and his father is Asian. Is this true? How can I find a picture of him?

I just wanted to confirm the ethnicity of Mary Matsumoto. She is listed here as Latino, whereas George Matsumoto is identified as Asian. The discrepancy might affect a number of issues, especially searching homicides by ethnicity.

Thank you for writing these reports. They're unique and important to the community at large.