Friends mourn father and former basketball coach: 'He was the dad everybody wishes they had' 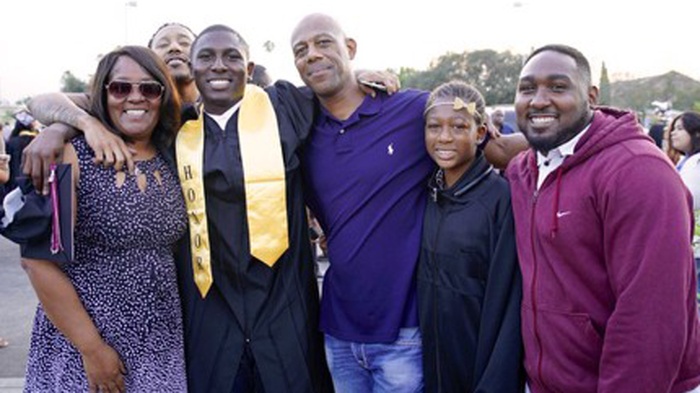 Maurice McKinzy was checking out a Camry that a friend had purchased for his daughter, blocks away from where McKinzy had grown up.

McKinzy began walking back to his car in the 7500 block of South Main Street when he was shot at least five times with a high-powered weapon, according to coroner’s records.

“We don’t know why he would have been targeted,” said Los Angeles Police Det. Eric Crosson. Police are still searching for the gunman.

McKinzy, a traffic officer at Los Angeles International Airport, was a father to a 19-year-old son and an 11-year-old daughter. He had helped raise two stepchildren and was a former junior varsity and assistant varsity basketball coach at John C. Fremont High School, about a half a mile from the scene of the shooting.

“He was the last person I would think something like this would happen to,” said Louis Austin, 46.

Austin and McKinzy grew up in the same neighborhood and were friends since the seventh grade. For McKinzy, the rows of houses and duplexes in Florence and the people who lived there were familiar. His grandmother once lived there, and his mother was raised there.

Many of his childhood friends were still in the area, and some young people knew him from his time coaching basketball.

For his friends and family, the reality that McKinzy was shot in a community where he had made a positive influence is devastating.

“That's what’s so tragic. That man grew up in that area his entire life. It was never an issue for him. They knew he was a basketball player, and they knew he was a coach,” said Heather Echols, the mother of McKinzy’s son, Marquis.

Growing up, McKinzy and Austin had to navigate the violence in their South Los Angeles neighborhood. Walking home from school meant crossing through rival gangs’ territory. But the two friends stayed out of trouble, choosing instead to be athletes. In 1989, their basketball team won a city championship, and McKinzy was the captain, Austin said.

A few years after high school, McKinzy came back to coach the students. He became known as the guy who could build up a player’s busted self-esteem. He was more than an authority figure in the students’ lives; he was also someone they could look up to. At one point, McKinzy bought a large SUV to be able to drive students home.

“He was the dad everybody wishes they had,” Echols said.

When Echols met McKinzy in the mid-1990s, she had recently separated from her husband and had two young children. McKinzy quickly began treating them as his own. Though the relationship didn't work out, Echols and McKinzy remained close, and McKinzy sometimes referred to their family as the "McEchols.'"

In 2012, McKinzy quit coaching so he could be available for son Marquis' basketball games.

“If he had to switch his schedule or sneak out … whatever he had to do, he’d figure it out,” Echols said.

McKinzy was also known as a “surrogate father” for young people around him, said George McLin, who grew up with McKinzy and Austin and is now the basketball coach at Fremont High School.

“He was there to take my son to practice; he was there to pick my son up from practice,” McLin said. “He literally helped raise my son.”

When Austin’s son, Dijon, went to the prom in 2015, Austin was preoccupied with prepping his home for a gathering. Amid the frenzy, he found McKinzy helping the teenager with his tuxedo. 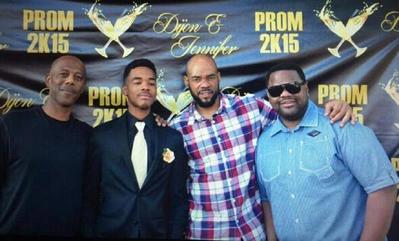 McKinzy nodded at Austin. It was taken care of.

“The next thing I know, my son comes out sharp and together,” Austin said.

McKinzy’s recent ex-girlfriend, Trina McGrew, said McKinzy was a homebody. It wasn't like him to be out late at night.

“He was the type of person where he was just content with staying at home and watching movies,” she said.

Recently, Echols reflected on McKinzy’s death as she packed up McKinzy’s apartment in Wilmington.

There was the notebook tracking his dominoes games. There were stacks of photographs, photo albums and Raiders and Lakers mementos.

“My initial response was, how dare you take this man from us in this fashion? Not that guy,” she said. “Now it’s just sadness and sorrow.”

When will the time finally come when we start to reverse the trend, when we say enough is enough, when we turn on these murderers, when we start to do everything to fight against these cowards, when we stop protecting these haters of everything moral, it use to be that it was primarily gang bangers being killed by gangbangers and we could say, well, that's the life they chose but not so anymore, now these demons are targeting our sons, brothers and father's who have nothing to do with that destructive lifestyle, it's time for us to have a zero tolerance for anything or anyone hanging out or driving through our neighborhood who we know or strongly suspect is a gangbanging thug, if the cops come and check them out at least they know who was there if something does happen, we need to report with no second thought, better safe than sorry, this is one of the reasons why white neighborhoods are so much safer, they will not tolerate even the slightest threat of crime, we need to do the same, I've already started, they'll be no thuggish looking people hanging around my area without my call to the police, if we all don't change our mindset soon the next street victim could be ours.

Wow am so sad to hearing the sad new of a friend of mine who I went to high school with .he was always a great person to be around. I haven't seen him since high school but didn't want to see him this way. R.I.P

Maurice was my 2nd cousin. He did not deserve to die like this. His Dad has been wheelchair bound for many years. His Grandmother is a faithful follower of Christ, who made sure her family knew the Lord. Maurice leaves behind a daughter who will never get to do a Daddy Daughter dance at her wedding. The cowards who snatched his life away, should burn in Hell.