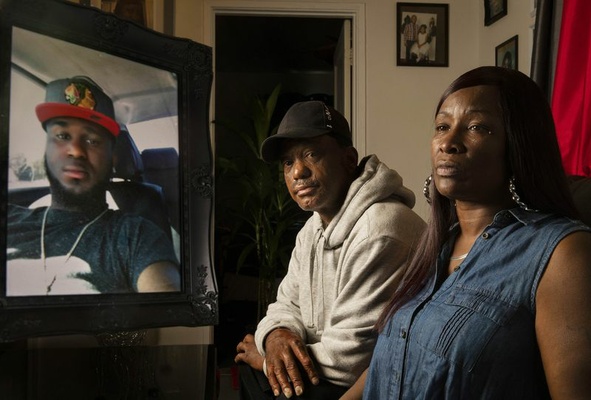 The funeral home in Lawndale was packed last month, with mourners spilling into the parking lot and onto nearby sidewalks to pay respects to 29-year-old Michael Hemphill III.

Hemphill, a security guard who left behind a 10-year-old daughter, was described by friends and family as a happy man who enjoyed life. Police don’t know much about his killing, except that he was shot in Watts, among a gathering of people.

Those who came to commemorate Hemphill described the persistent violence that shades their own lives.

“This should not be a custom,” the minister, Akela Wroten Jr., told the standing-room crowd. “We gotta protect one another.”

Vera Conner described her son, known as “Mike Mike,” as a happy-go-lucky man who continued hanging out with boyhood friends in the Nickerson Gardens housing development even after he moved away.

Shortly after 11 p.m. April 12, gunfire rang out at the gathering in the 1300 block of East 111th Street. Hemphill and two others were wounded, police said. Hemphill died at a hospital. The two others survived.

Investigators are still trying to piece together what happened.

Conner said she would miss her son coming into the house at all hours of the night, messing up the dishes as he cooked a meal.

“He was just a pleasant person,” she said.

Hemphill loved his daughter, who was his righthand chef in the kitchen, especially when he’d make fried rice.

“When he wasn’t working, he’d hang out with her,” Conner said.

Wroten, 28, who grew up with Hemphill, has seen others his age fall victim to gun violence.

This post was part of a May 1, 2019 article describing violence in South L.A. in the wake of the Nipsey Hussle killing.

I am sorry for your loss.