A mother begs for help identifying son's killer: Slain 4-year-old 'was my everything' 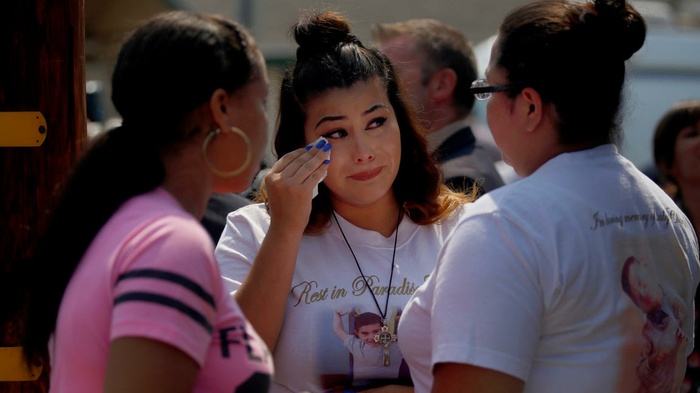 Coral Salvador thought her 4-year-old son was asleep when she peered into a bedroom and realized he wasn’t there.

As she walked toward the front door, she heard gunshots, and saw her son’s motionless body on the front porch.

“There was blood everywhere,” she said.

Salvador grabbed the boy and ran inside, where she performed CPR in the living room and cradled his small head. She could feel where a bullet had punctured his skull.

"I knew he wasn't going to make it, but I held out hope," she said.

Doctors at the hospital tried to resuscitate the boy but were unsuccessful. He died shortly after midnight.

Nearly two months later, Salvador, 23, returned to the home along with other family members and Los Angeles County sheriff’s homicide investigators to ask the public for help identifying the shooter and to publicize a $20,000 reward.

Standing a few feet from a small shrine for Salvador Esparza III on Thursday, Coral Salvador's voice shook as she pleaded for someone to speak up in the killing of her son, who she called “Baby Chavita.”

"An innocent little boy was my world, he was my everything," she said. "It has affected me in ways I never thought it would."

Her son was shot July 5, when a man walked up to a home in the 500 block of Figueroa Drive and began shooting at people on the porch, according to the Los Angeles County Sheriff's Department.

The gunman fled in a dark-colored car, investigators said.

Authorities said last month that the target may have been Coral Salvador’s boyfriend or his brother, but on Thursday, they said they believe a 27-year-old gang member who was visiting the home was the intended target. He was wounded in the attack but survived.

About two hours earlier, the man had been in an altercation down the street from the home, which authorities believe motivated the shooting.

"When he came to this house, he brought the problems with him," sheriff’s Lt. John Corina said.

Since the shooting, Salvador has been unable to go back to work as a medical assistant at Huntington Memorial Hospital. She was recently diagnosed with depression, anxiety and post-traumatic stress disorder — issues she has never dealt with before, she said.

At one point, she was hospitalized after overdosing on her anxiety medication “because I just didn’t want to be here.”

At the news conference on Thursday, neighbors spilled out of their homes to watch television news trucks and cameras assembled on the road as Salvador made her plea.

A half-block down the street, residents of a peach-colored apartment complex crowded the building’s entrance to get a better look.

Corina said he hopes anyone who saw anything suspicious the night of the killing will come forward to help investigators.

On that warm night, people were outside in their yards or on their front porches and would have seen something, he said.

Investigators believe the shooter has ties to the area and are hoping the reward will inspire tips.

After the news conference, deputies walked door to door in the quiet neighborhood and passed out fliers with photos of the child with bright brown eyes, smiling.

Photo: Coral Salvador dabs her eyes after a news conference in Altadena on Thursday where a $20,000 reward was announced for help in finding the killer of her 4-year-old son, Salvador Esparza III, on July 5. Credit: Francine Orr, Los Angeles Times