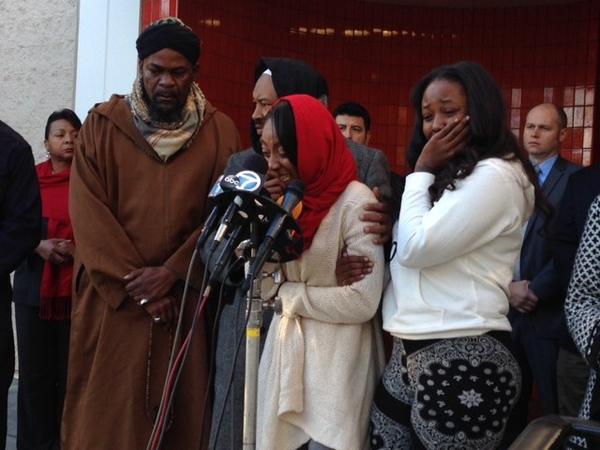 Sawan Mock could barely speak through her sobs Tuesday morning as she pleaded for someone to come forward with information about the fatal shooting of her 7-year-old son.

"When did it become OK to start shooting kids?" she asked.

Police said they have no eyewitnesses and few clues in the Dec. 2 shooting and announced a $50,000 reward leading to the identification, arrest and conviction of the people responsible.

Taalib Pecantte was shot in the back while sitting in a car with his mother and her male friend in the 1900 block of South Corning Street in Mid-City. Taalib died of his injuries a day later.

“I know somebody had to see something,” Mock said.

Mock, 28, had just returned from a laundry facility about 9 p.m. with the friend, when three to four men fired more than 20 shots at their car, LAPD Lt. John Radtke said.

“This is a completely senseless act,” Radtke said.

He said police were looking for three to four men, suspected of being involved in a gang, who fled in a white compact car after the shooting. At least two of the men fired into the car, Radtke said.

LAPD Det. Rolando Rodriguez has asked for anyone with tips or information, including rumors about the attack, to contact police.

"That rumor could give me something," he said.

L.A. City Council President Herb Wesson said at the press conference that Taalib was a second-grader who got A’s and B's and excelled in math. He wanted a cellphone for Christmas so his mother wouldn’t worry, and he played football with the Compton Vikings.

Wesson said he would ask the City Council to increase the amount of the reward to $75,000.

LAPD Chief Charlie Beck told reporters that investigators “need somebody to come forward” with information about the case.

Though the chief noted that gang violence was down across Los Angeles, “one death is one too many. And a 7-year-old absolutely cries out for public support.”

He said that the public's support was key to solving gang-related crimes.

“We’ve come a long way, but we still have a ways to go,” Beck said. “And the way that you make progress on that is to have the community rally around the victim, and that’s what needs to happen here.”

The reward announcement came within days of Taalib’s funeral and burial at an Islamic cemetery in Lancaster. Anyone with information is urged to call LAPD’s West Bureau homicide division at (213) 382-9470.

Photo: Sawan Mock, 28, pleads for witnesses to come forward in the shooting of her son, Taalib Pecantte, who was 7. Credit: Nicole Santa Cruz / Los Angeles Times

One should, of course, comment on individual murders, but a global view is also quite wise & may be even more informative in the long run. It would be nice to discuss things quantitatively with the provisioned information.

A quick look at the year revealed the following seasonal preferences.

To get that, of course, December was added to January & February to achieve "Winter". A chi square test showed this distribution was not chance related, with P = 0.003. A vital question would be whether neighborhoods with more murders have less air conditioning/heating. The reason this is so is that it might well be worth providing those things for free. It is unlikely that school has any real effect because here is the list of average ages of victims by season:
Winter 33.61016949
Spring 33.16339869
Summer 33.78212291
Fall 35.15441176

Not much of a difference, obviously, at least with respect to the victims, who are often where they should not be.

The fact of the matter is that this isn't the first kid to die this way and it won't be the last. We have made a whole generation of kids that want instance gratification and instant satisfaction. We have raised a generation of people what will never know what hard work is. What if feels like to fall in to bed at night so tired. Or what it means to study all night for a mid-term or a final. A generation of people have been raised to be self centered and amoral. This kind of killing won't stop we have released the beast and there is no possiblity of reeling him back in. It is sad the brutality that we release on each other. I worked in children services for a while a little over 5 years before I had to get out. The things people do to children is well there are no words. Then I moved to hospice care...I found how people treat their old it just as badly as they treat their young. when we look around for answers, we need to look no further than the mirror. Every time we go to school to bail our kids out of trouble that they should get punished for, or everytime you call the coach or you justify your kids behavior with "kids will be kids" or he is expressing himself. Or worst when you go yelling and screaming to the police station to get your kid out of small trouble. I remember when my son was about 13 years old. He got caught cutting school. He got the hard judge, that made him do 15 hours of community service. He swore every Saturday for 4 weeks that he was never going to do anything bad again because he hated community service. He is now 24 years old, a wonderful contributing member of society. A really good man. I have been blessed and thankfully cutting school was the worst he ever did. Just remember when we look for the whys we might not like the answer we get back.

Since when did it become OK to shoot kids? Clearly, she must not be in her right mind if she thinks it would be OK to shoot anybody regardless of their age. While I am sorry for her loss, her moronic comment just makes it very clear what's wrong with society, and a certain ethnicity that seems to instill values that include it's OK to shoot someone, just don't aim at the kid. I am repelled and disgusted.

@The Truth
The mother's company could be a law abiding citizen. The shooter just saw what he thought was a rival. These people don't know who anyone is, they just shoot. Too many people have been shot at or killed just because of how they look.

Sad 2 say...but we parents have to be aware of the company that we keep, especially in the prsence of our kids. Just a guess but the kid was not the intended target...maybe the "friend" is affiliated or just looks the part. In any case we have to be aware...not passing judgement...just a cold fact of the world we live in....SAD.

Taalib wasn't the victim of a 'society that let him down'. He was the victim of a small band of immoral, twisted, probably-fatherless, anti-social criminal misfits who obviously couldn't shoot particularly straight.

Just heartbreaking. I'm enraged and I have nothing to do with this. I can only imagine the pain and anger coursing through that family's veins.

Those sensless cowards had better pray the cops find them first.

RIP Taalib, you were a victim of a society that let you down. Sad.