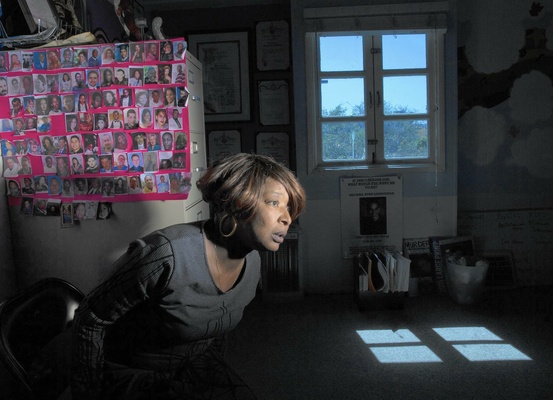 It's been nearly 20 years since LaWanda Hawkins got the call that would change her life: Her 19-year-old son, Reginald, had been found shot to death off Harbor Boulevard in San Pedro.

Within the year, she and other parents founded Justice for Murdered Children, a nonprofit that advocates for families of homicide victims.

Since then, the San Pedro woman has been to candlelight vigils, marched around the city, helped pass legislation to aid crime victims and taken phone calls in the middle of the night from those going through the pain she knows so well.

Hawkins works out of a small, one-room office near the Port of Los Angeles painted with brightly colored rainbows and butterflies. (A brother of a homicide victim had been acting up in school, so she let him paint the office, Hawkins said.)

Photos of the dead adorn the walls. There's a man in a graduation cap, a girl with barrettes in her hair. There's also a new addition: a photo of Eliza Delacruz, the 3-week-old Long Beach baby who was kidnapped and killed in January.

"I will never forget that," Hawkins said of the killing.

When Hawkins saw the news reports of the child found in an Imperial Beach dumpster, she felt she needed to help. She went down to Long Beach and to the neighborhood where she thought the family lived. She ran into the child's grandmother, who was grief-stricken.

Hawkins told her she'd be back. She got into touch with the Long Beach Police Department and printed reward fliers in English and in Spanish. Two days later, she organized a vigil and walked door-to-door with the child's grandmother to ask for help in solving the case.

The mission for her organization is simple. She hopes the group can help prevent homicide and also push for survivors to be treated with dignity and respect, especially by law enforcement.

She recalled a mother telling her that she was scolded for asking a detective too many questions about her son's death.

"They have the right to ask as many questions as they want to," she said at her office, her voice raised and her hands in the air.

LAPD Deputy Chief Bob Green, who has known Hawkins for about a decade, said she has helped build bridges between law enforcement and victims' families.

"We need to be honest with this crime called murder," she said.

Next week, Hawkins, her mother and other members of the organization will travel to Washington to be honored by U.S. Atty. Gen. Eric H. Holder Jr. It's not the first time Hawkins or the organization has been recognized.

"That means we're getting the word out," she said. "That means someone's listening."

L.A. County Deputy Dist. Atty. Kathy Cady, who works with the Victim-Witness Assistance Program, helped write the nomination for Hawkins. Cady said that even after Hawkins' sister was slain in Arizona in 2011, she still showed up for an event about a month later to honor crime victims and survivors of those who have been killed with a smile on her face and a positive demeanor.

"She is a woman of action and really an inspiration, especially in light of all the tragedy she's had in her life," Cady said.

This year, Hawkins' only son would have been 39.

She wonders if he would have had children, and what he would be like.

"I've never met anyone in this club who didn't want to get out," she said. "We don't want members."

My sisters son was murdered Jan 10,2021 and like some of the others she only had one child he was only 26 just starting his life. I too lost a son who was too young. I breaks my heart to see her go through such pain. The police ask to give them some time. Time is certainly not your friend. This is her second holiday with him.
There is no consoling her. My heart aches for her
Him

I need help from Mrs.Hawkins, my son Keith Jackson was murdered on December 28th, 2016 on alondra blvd and a Essie st in Compton.. My child was shot in the head in his car at a stop light. It has been a very hard year for me and even harder because I live out of state in Atlanta. I been to know if Mrs. Hawkins could help me with fliers for a reward in order to apprehend and convict the person who killed my child. Keith was very active in the community and worked for.Los Angeles county drug rehabilitation center. Please help me in anyway that you can. Thank You, Marilyn Manuel.God Bless

This situation is not about me but my best friend who lost her son an his cousin to murder on the same day at the same time. She's been through a lot an still battling her son death. They were murdered 3/25/14. I really want her to talk with someone whose been going through the same thing. Then 12/18/14. Her nephew was found dead . Not sure of all the details behind that but her sister is also dealing with his death. I love this family an want them the help they deserve.

L.A. Times - There's was a homicide in the city of Downey on April 19th, 2015 off of Woodruff Avenue and Firestone Blvd. It's not listed here. They called him "Junior", first name James.

I met Lawanda about 6 yr ago after my daughter was murdered in Tustin, Orange County.
She came all the way from San Pedro to the Santa Ana Court to support me, sitting with with me at my Daughter's murderer trial , she hold me while the read the verdict. How can ever forget her?
Congratulations Lawanda! You are my hero!