Mystery surrounds Hawthorne killing of motorist in 'hail of gunfire' 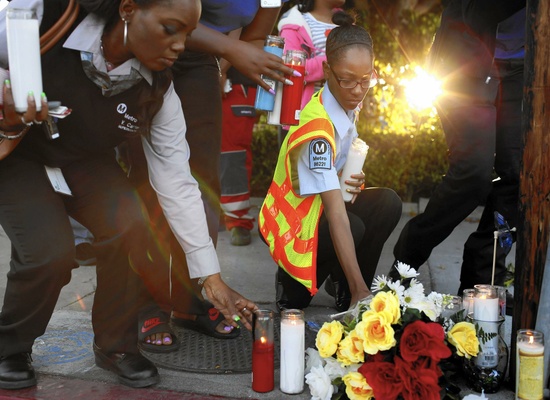 Denise Berry and her 12-year-old son were headed to a barbershop when her son pointed out a man's feet hanging out of a car window at a stoplight.

The two shared a laugh, then continued on their way Wednesday afternoon. Berry, 44, noticed that a car was following them, said Lt. Dave Coleman with the Los Angeles County Sheriff's Department. She saw a Hawthorne police officer, pulled to the side of the road in the 14200 block of Kornblum Avenue and told him what was going on.

He told her to pull in front of him so he could help her.

As Berry got back into her gray Mercedes, a Cadillac pulled up, and a man got out and began shooting. There was a "hail of gunfire," Coleman said. The Hawthorne police officer jumped out of his car and fired at the gunman, killing him.

Berry was also pronounced dead at the scene. Her son was wounded but able to run away. He was released from the hospital Thursday, family members said.

Investigators are still piecing together what may have led up to the shooting. Coleman said there were no gang signs thrown, and Berry did not appear to know the man or the two other people in the Cadillac.

Coleman declined to comment on whether the dead gunman, identified as Robert Washington, 38, may have been under the influence of drugs or alcohol.

On Friday, the driver of the Cadillac, 24-year-old Stanley White, was charged with murder. The other person in the car has not been charged.

As the sun set Friday evening, friends and family gathered near the crime scene to remember Berry, a single mother of three. They described her as a strong and charismatic woman, who made friends feel like family. 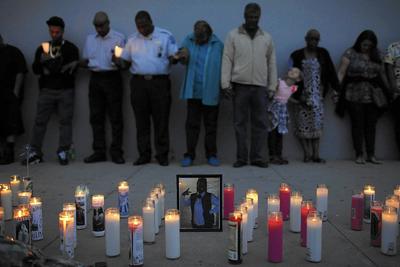 Her sister knelt down to light pink and white candles. The crowd blocked the sidewalk, as people wept for Berry, who lived in Hawthorne and worked as a Metro bus driver for four years.

People held plastic foam cups with candles inside. A bit farther down the street, a small vigil had been set up for Washington.

Lucy Rivera, who has lived off Kornblum Avenue for 15 years, said shootings don't happen in the neighborhood.

"I had to come out here and show my respect," she said.

Berry's supervisor, Venette Carter, said the bus driver wasn't only a colleague, but a friend.

"Even on bad days, she could be the most positive person," she said. "The workplace will definitely be different without her."

Many people mentioned Berry's smile and laughter. Cheryl Lomax, a longtime friend, said she used to sit on her patio, relaxing with Berry.

"Very few people will know a person where laughter is always enough."

Photos: (Top) Crystal Allen attends a vigil in Hawthorne for her sister, Denise Berry, a Metro bus driver who was shot to death while driving her car. The victim's 12-year-old son, who was in the car at the time, survived. (Bottom) Mourners gather in memory of Denise Berry, 44. A policeman killed the gunman who shot her. Credit: Katie Falkenberg / Los Angeles Times

It is a mystery to most of us that a mature man would respond to any action short of actual physical attack with violence, but no mystery in the fact that it happens daily. In my world any man who reacted this way to any action by a child (or anyone for that matter) is no man, though that (we are told) is what they (the violent, violent gangs, etc) are trying to prove. What a sad loss for the family and friends of this lady... and for all of us. Another good citizen (and good mother) lost to inexcusable violence.
In light of many stories of police acting inappropriately, it would have been nice to see more mention of this officer, who jumped from his car trying to save woman and child, into gunfire. It was courageous.

Something is not adding up.

Hawthorne police are not giving ALL the facts to this story.Within the first three to eight hours of this shooting Hawthorne detectives/police figured out what started the shooting.Simply ASK the occupants/driver of the cadillac why were they in the area. Since he is facing murder charges Im sure he's gonna TALK.

So don't believe the cops.

They will LIE with a straight face but fail to realize that Karma will hit their immediate FAMILY(different types of cancer inflicted on their children and old parents) causing them to commit suicide at some point.

Are there any new developments regarding this case?

What's the mystery? Accorfing to the U.S. Census, a certain population demographic comprises a mere 13% of the populations. Males comprise only 6%.

Yet, according to U.S. Dept. of Justice data, this demographic is responsible for 65% of the violent crime.

Nothing "mysterious" about this. It's typical.