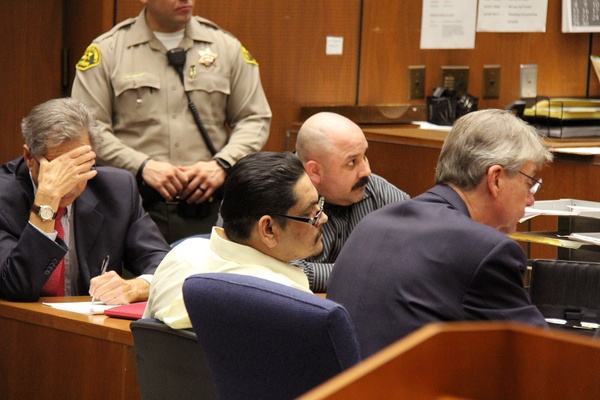 It took 11 years and five months after the body of 24-year-old Jesse Lyal Aguilar was found beaten, bound and burned in the back of his car, but his family finally got their time in court, and at least part of the verdict they hoped for on March 29.

After the verdict was read, Aguilar's family gathered outside the courtroom for a somber celebration, quietly hugging the prosecutor, Ken Von Helmont, and Los Angeles County Sheriff's Dets. Ray Lugo and Sandra Jimenez.

Jesse's mother, Nancy Aguilar, said she was "in disbelief" that the wait was finally over.

“Does this give me closure? No,” she said. “Closure comes probably when I take my last breath. But does it provide some answers and justice? Yes.”

The jury found Silvas and Vallejo not guilty of torture. That disappointed some family members, who believe Aguilar was still alive when his gagged and bound body was set on fire and left to burn in the trunk of his car.

During the five-day trial, Von Helmont showed photos of Aguilar’s upper body, wrapped in melted plastic, leaning up against the rear seats of his blue Toyota Corolla. The back seats had been pushed forward off their mountings — evidence, Von Helmont said, that Aguilar had tried to escape from the trunk.

There was also testimony from Silvas’ former girlfriend, Cindy Aguirre, who told investigators she picked Silvas up late at Vallejo’s house in La Mirada the night Aguilar was killed, and remembered his demeanor as being odd.

Investigators didn’t find Aguirre until 2010, but her statements were instrumental in building their case, Det. Lugo said. Jurors heard Aguirre testify in person at the trial, and listened to excerpts from her taped statement in 2010.

Silvas went into jail on an unrelated charge shortly after Aguilar died, Aguirre said, and when he got out of jail in February of 2007, she told Silvas she’d heard the police were looking for her regarding Aguilar’s death.

But medical experts could not say definitively whether Aguilar was alive during the fire. One medical examiner testified that the autopsy should have included tests to see if Aguilar had any soot in his esophagus or carbon monoxide in his blood, which would indicate whether Aguilar had been alive, but for reasons never explained, those tests weren’t done in this case.

Lugo said during the trial that Dets. Sandra Jimenez and Al Carrillo got permission to wiretap a telephone conversation and captured Vallejo saying “I was there” about the night Aguilar was killed.

Investigators also testified that when Aguilar’s body was found, he was holding a scrap of denim in his right hand with “DV13” written on the cloth—the name of Vallejo’s gang, and that a cigarette butt with Vallejo’s DNA was found in Aguilar’s car, even though Vallejo told investigators he didn’t know Aguilar and had never been in his car.

Silvas’ defense attorney, Kessler, argued that the prosecution hadn’t definitely proved his client’s involvement either. But another wiretap recording captured Avila telling a jail informant that he “cracked that fool” after LA’s Most Wanted did a story about the case in June 2015, naming Silvas and Vallejo as persons of interest in the crime.

In portions of the transcript given to the jury, Silvas said he’d seen the show, and even corrected a detail that only the perpetrator would have known, Lugo said, saying no zip ties had been used in binding Aguilar.

The motive behind the killing was never fully explained, Von Helmont said, but investigators believe Silvas was jealous of Aguilar, a strong and handsome Army veteran who had participated in the first invasion of Iraq after the 9/11 attacks and was admired by many women, including Silvas’ girlfriend.

From the time Silvas and Vallejo were arrested and charged in November 2015, Aguilar’s family struggled with the many delays in going to trial. Silvas first insisted on representing himself and then later requested an attorney, causing months of delays. The preliminary hearing date was postponed more than once, because Silvas refused to leave his jail cell or said he was ill.

Nancy Aguilar said she called Lugo monthly for more than a decade to make sure he didn’t give up on her son’s case.

“This case was difficult, but God picked Ray because he knew he’d keep going,” Nancy Aguilar said after the trial. “He told me, ‘Never give up, because we won’t,’ and this is how it turned out. ... My son suffered for several hours, but their suffering will be a lifetime in jail.”

A first-degree murder conviction carries a sentence of 25 years to life in prison, Von Helmont said. The sentencing has been scheduled for April 24 at the Los Angeles County Superior Court’s Clara Shortridge Foltz Criminal Justice Center.

Photo: Flanked by their attorneys, Juan Vallejo, left, in glasses, and Anthony Silvas wait for the verdict in their murder trial in the Oct. 25, 2006, slaying of Jesse Aguilar.  Credit: Jeanette Marantos / For The Times