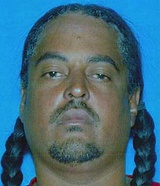 Omar Duran Saunders, a 39-year-old black man, was shot and killed Tuesday, April 22 in the  6400 block of Brynhurst Avenue in Hyde Park, according to Los Angeles County coroner’s records.

Saunders was standing in front of an apartment complex with three other men about 7 p.m. when a dark-colored four-door sedan approached and someone inside fired multiple shots at the group, said Los Angeles police Det. Sal LaBarbera. The car fled west on Hyde Park.

Saunders was taken to a hospital where he was pronounced dead at 11:53 p.m., according to coroner’s records.

Do you have information to share about the life of Omar Duran Saunders ? The Homicide Report needs your help. Please fill out this form or e-mail us at homicidereport@latimes.com.

Share a memory or thought about Omar Duran Saunders

Well I know crazy 4 years crazy was a cool guy funny lovable he just was the type of person that you always want to be around if you was a real person all that fake stuff that wasn't cool with him crazo just cuz he was affiliated see even from a hood don't mean that he deserved to lose his life he was standing outside he wasn't hurting anybody in a car pulled up and shot and killed him that's my homie love him respect him and miss him to this day. If crazo had it and u asked he would look out for u. So with that being said all yall negative speaking ppls i hope u think like that when its on of your friends are family member who loses they life how my homie did. Respect goes a long way.

Nobody
GREAT response. RIGHT on.

Carlos H-Are you saying you kicked soccer with him?

Did he had any family? I think I know him
I just to kick it with him

How do these comments get through???

It's not OK to call a gang member out for being a gang member and yet it is perfectly fine to call syscom and meck out for stating the obvious...

I understand family members wishing to defend their loved ones.... But this is not the place... This is a public forum for homicide victims in a state with a massive gang problem leading to a homicide rate that resembles a small war...

Go make a Facebook tribute page for your loved ones and pour your love there...

Leave this blog for the facts about the homicide... After all that is why this was conceived in the first place, otherwise it would be called the obituaries....

— Tracee Jackson
All I did was Google the address where he got murdered and you can see the graffiti; Rollin' 60s. Not to mention Streetgangs did an article on him. Just commenting on what I see.

These ppL Meck and Syscom...aLL you do is comment on EVERY post as if you know these ppL...HOW STUPID!! If you don't have anything good to say, then say NOTHING. You're arguing back with KRN and saying negative things when this is NOT a forum for that. This is for the ppL that knew and Loved these ppL. Everytime I check this page, there are aLways negative comments from ppL Like you. What do you do, sit on here aLL day?? GET A FREAKING LIFE!!

Omar was my like my brother and these remarks could be kept to ur self u all show how judgmental people with no life of there own can be.

— *KRN ; the deceased was a member of a violent street gang who inflicted terror and injury upon others and society.

There isn't much you can say about an individual with that in his biography. Maybe you also need to apologize to the many people who were victims of him.

@ *KRN I guess him being a "Big Crayzo" was what got him whacked. Maybe if he was a Big Goody he'd still be walking the streets but instead he was a "Hoodstar" caught slippin! and nobody got time for slippers

U ppl (meck, danish42 and ironryan) have no respect!! Its obvious u dnt kno him. Hes a son, a father, a husband/boyfriend, a brother, an uncle, more so a child of god, and he was and will always be well loved and respected. So regardless of th bs yall talkn, no one can take away the facts. What will ppl say about u when ur dead??How do you think ur family would feel reading some bs from a nobody about u?? I loved him and will always love him. His name is Big Crayzo n he was a Hoodstar!! Nobody can take that!!

Looks like he was from the Rollin' 60s Crips.

Found out this guy was a member of a gang.
Went by the street name of "Crazo", whatever that means.
http://www.streetgangs.com/photos/042414-rip-crazo

Guy looks means or just has an attitude.

Im not sure about getting murdered but this guy should of at least been given 20 years for his hair do, its a shocker!